Yet Another Company Rips off Nintendo (with a Smartphone game)

This time however, it’s the laziest possible kind of copyright infringement, because they’ve actually posted Donkey Kong Country (the SNES original) on the Google Play Store under the hilariously sad/misleading name of ‘Retro Box Studios’.  You can find screenshots of this blatant act of thievery, as well as more info, after the break.

Here’s a Tweet showing the game on the store:

Of course, this listing is gone due to it being completely illegal (and presumably Nintendo demanding Google remove it after the news broke out), but it’s not the only one. For instance, this ‘Retro Box Studios’ company? Has stolen other Nintendo games and stuck them up too. Like Super Mario All Stars: 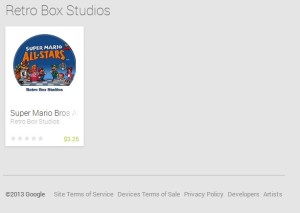 Even more… ‘interestingly’, this is only one of about ten attempts to steal Donkey Kong Country and stick the game on the Google Play Store. Indeed, in just ten minutes of searching, I found these (now removed) listings for the game: 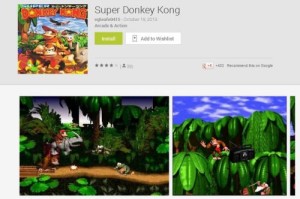 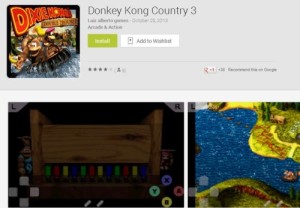 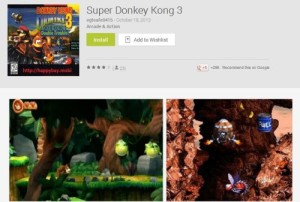 Which shows quite some determination from the ‘pirates’ trying to make a quick buck. I mean, calling it Super Donkey Kong after the Japanese title now? Releasing about ten different stolen versions of the same game? Somehow mixing up Donkey Kong Country Returns and Donkey Kong Country 3? What the hell is this?

I mean, I’ll give Google some credit, they do seem to actually be removing the tons upon tons of stolen content that’s being pointed out, almost all the last pictures are from their cache… but come on. Surely someone should have at least considered a name blocking/filter option by now? To auto reject games if they have ‘Super Mario Bros’ or ‘Donkey Kong Country’ in the title? 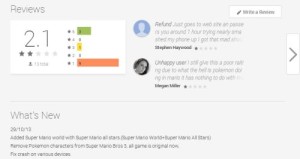 Above: Removed Pokemon characters from Super Mario Bros 3. All game is original now.

Yes really. He says ‘removed the Pokemon characters, game is original now’. Said game? A ROM of Super Mario All Stars. Yes, because removing characters from one copyrighted series from an already stolen game makes it perfectly legal to sell for real money! It’s like some people just don’t have a clue…

But hey, what do you think? Are these ripoffs just hilariously bad? Is Google being way too lenient with what they allow onto the Play Store? How the hell can people think selling copies of Nintendo games for a fiver as apps is even remotely legal or fair?