Lately with the E3 hype dying down, I’ve noticed there hasn’t really been much said about Mario Party 10 for the Wii U.  Oh sure, Mario Party Legacy and a couple of other fan sites about the series (some of which we here at Nintendo 3DS Daily endorse as affiliates) hyped the hell out of it.  But that’s their job (so to speak), and the coverage about the game from other, more mainstream news outlets has honestly been kind of non existent to mediocre.

But I actually think Mario Party 10 looks great.  Why?  Because practically speaking, Mario Party is THE series the Wii U was made for.

It’s true.  Whenever I think ‘asymmetric multiplayer’, I think Mario Party. I think 1 vs 3 minigames and players being complete jerks to one another in the most meanspirited ways possible.

And Mario Party 10 looks like to amplify that by about a million.  Why?  Bowser:

Rampaging through boards, smashing the hell out of player carts, trying to blow characters up in the most over the top ways possible… I have a feeling playing as Bowser will be an absolute blast.  Especially if you get to set up four difficult CPU players and spend the next hour or so trying to make them suffer horribly to repent for their crimes in past Mario Party and Mario Kart games.  Or I guess if you’ve got a bunch of ‘friends’ you don’t really enjoy of the company of all too much.  Basically, it’s a griefers dream game.

What’s more, it’s pretty much the perfect marketing tool for the asymmetric multiplayer concept.  Oh sure, Nintendo Land exists, but a bunch of Miis running around in Nintendo costumes does not sell.  It doesn’t appeal to anyone, Nintendo fans or casuals alike.  Game & Wario exists… but it’s usage of the GamePad ranges between decent and utterly abysmal, and Nintendo’s marketing for it was roughly as good as that for the likes of Delgo (or [insert another horribly crashed box office bomb here]).  This on the other hand… could be a pretty good way to market the mechanic.  After all, Mario Party fans already know how this asymmetry works, they just know it as ‘1 vs 3 minigames’.  And the rest?  Well, they have to admit that being able to play as a giant turtle dragon thing and wreck other people’s games is a pretty good selling point, right?  Whereas Nintendo Land was mostly tech demo and Game & Wario just confused, this game could work by appealing to people’s dark sides. 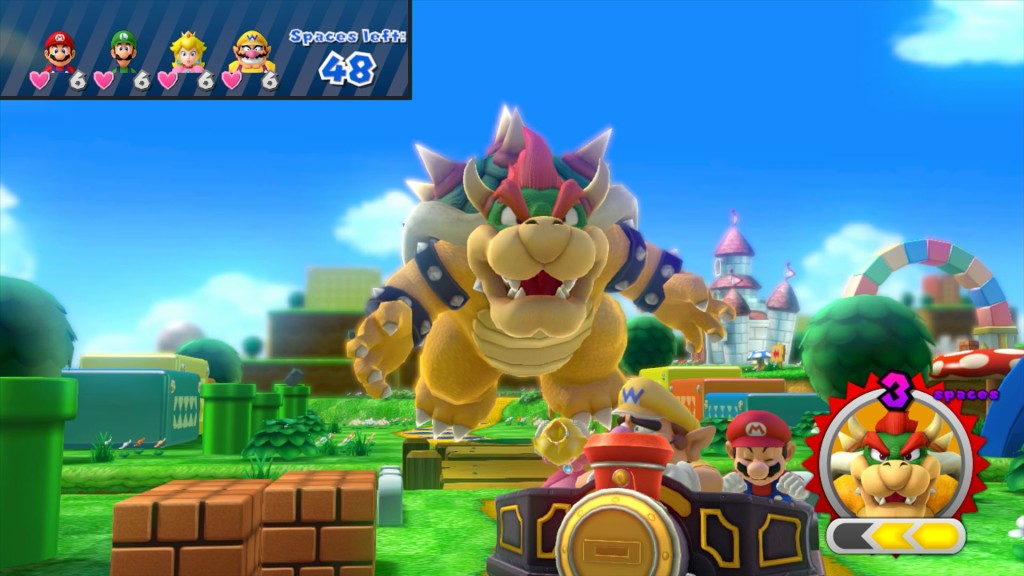 Above:  How to destroy friendships very, very quickly.

Hell, you know what would really sell this game?  Asymmetric Bowser mode online.  Oh sure, they’ll never add it, because the concept is anti social as heck.  But come on, imagine the interesting possibilities you’d get if you could join random people’s games, play as Bowser and just wreck everything.  Or if they’re real cruel, if you could join ‘friends only’ games as the designated antagonist and just cause absolute mayhem.  Forget Pikmin or Nintendo Land, this game could (in theory) have made for a far more interesting Wii  U selling point, an online game specifically designed to encourage antagonistic play and jerkass behaviour rather than punish or prevent it.

Bowser is awesome! Glad to see him playable in more Mario games! And Wario too!!