Okay, this is odd.  Apparently, Nintendo UK Wii Youtube channel is uploading a whole bunch of trailers showing Wii games that have been out for at least two or three years now.  Like Mario Kart Wii and Mario Strikers Charged.

Just look at the time stamps on this Youtube picture: 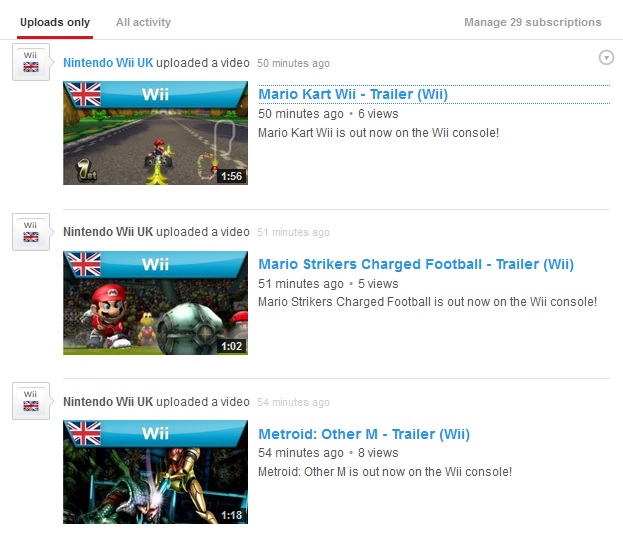 It’s just rather strange if you ask me, especially when you realise that Nintendo is officially trying to market a follow up to at least one of those games and that this confusion might be cutting into their sales.  Did their channel get hacked or something?  Have Nintendo UK given up on the Wii U altogether and decided the Wii is easier to market?  Is this preparation for Wii U rereleases of some of these titles?  Or is there another reason I’m missing? 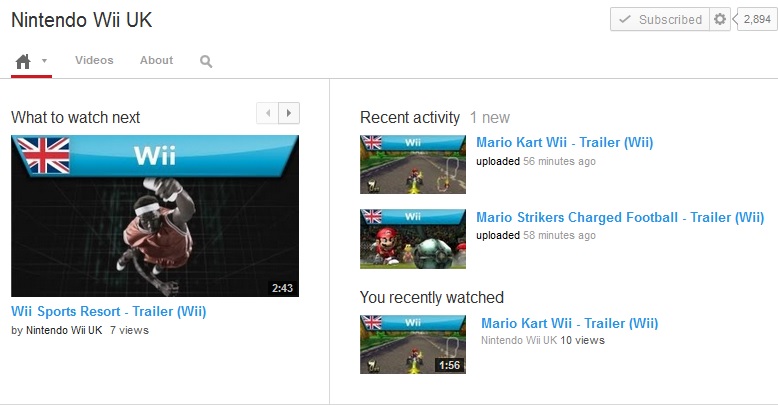 Above: Before this point, you’ve got videos of Pandora’s Tower, PokePark and Skyward Sword.  After… you’ve suddenly got videos of Mario Kart Wii and Mario Strikers Charged Football.  The hell?

Because until now, their Wii channel said the last video uploaded was a year ago.  And mostly had videos of somewhat recent Wii games like Skyward Sword and PokePark Wii. Yet now they’re uploading videos of old titles by the bucket load?  What’s going on?

Why do you think Nintendo UK is suddenly resuming their Wii Channel and uploading tons of trailers for games released many years ago now?

Have you considered that they might be coming to Wii U Virtual Console?

I would say that has more to do with the Wii not being a viable platform to have multiple gigabyte downloads–how long do you think it would have taken a user to download one GC game? You can’t argue the Wii U has a better medium for presenting downloadable content. Why wouldn’t they explore it?

Actually, You are looking at the Nintendo Wii UK channel. Each console has a nintendo channel so those are wii games only. For example, there is the Wii U UK channel.

But these are old games on the Wii channel. Said channel mostly had videos of Skyward Sword, Pandora’s Tower and other recent games before this. So why they suddenly uploaded videos of four year old games there after they’ve already spent months uploading videos of modern ones?