Wario and Princess Daisy Not Commonly in Mario Storylines because of Differing Art Styles?

Well, this is an interesting justification by Shigeru Miyamoto for why the likes of Daisy and Wario are mostly found in Mario spinoffs and sports games rather than the main adventures.  Apparently it’s because of the games they originated in and the difference in art style between said games and the more traditional Mario series.  Heres his explanation:

Both Daisy and Wario were originally drawn as part of the “Mario Land” games and had the same illustrator. The art style of those games was different from the “Mario World” series with Mario, Luigi and Princess Peach, and for a long time that was the reason that we didn’t have those characters enter into each other’s stories.

Through the sports games, then you started to see the overall character lineup grow a little more. What’s interesting is, because we’ve moved into an era where the characters have moved from some of the hand-drawn or the 2-D illustration style into the full 3-D model style, the differences between the art styles are no longer there. So, although originally we never had them entering each other’s stories because of the different art styles of the different games, perhaps now we don’t have to follow that condition anymore.

On “Super Mario 64” for the DS, that game did, in fact, have a multiplayer mode that Wario appeared in.

I’m sorry, but I don’t particularly buy into this reasoning much.  So the art styles used in Super Mario Land 1 and 2 are ‘too different’ from those in the main console platformers?  What the heck is he even on about?

I mean sure, Mario Land 1 looks… different, but that’s only because the graphics in said game were terrible even for the time and were stuck on a console with less ‘power’ than even the NES.

Additionally, it doesn’t really reflect well on Nintendo and the amount of effort placed in the official art or sprites in their later games, since he’s basically admitted that they couldn’t be bothered to redraw ‘lesser known’ characters in a new art style.  Come on, even the fan artists of the world have figured out how to draw the likes of Wario so he matches the Super Mario Bros 3, Super Mario World or Mario and Luigi style!

It also doesn’t make a whole lot of sense, especially when you consider this point made later in the interview:

Wario was introduced in Super Mario Land 2 Six Golden Coins.  That was literally the last mainstream Mario platformer prior to the series jumping into 3D with Super Mario 64.  And for anyone keeping track of time, the difference between Super Mario Land 2’s release date (1992-1993) and Super Mario 64’s release date (1996) was literally just three or four years.  Given that 3D meant Nintendo had to ‘redraw’ or ‘remodel’ every character in the franchise anyway, wouldn’t it have made sense to take this chance to redraw characters like Daisy, Wario, Mario RPG characters, etc to match the style of the mainstream Mario platformers?  After all, 3D means the art style thing was kind of irrelevant by then, and even more so given that early 3D games are basically looked the freaking same!

Not to mention that the spinoffs used these all the time, and generally made their appearance match that of the main cast perfectly.  Look: 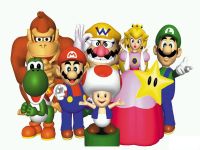 Would it really have been hard to take the models/artwork from the Mario Party, Golf, Tennis or Kart series and use them when adding ‘non mainstream’ characters into the main platformer series?  After all, every single Mario spinoff of a generation bar Paper Mario and Mario & Luigi generally uses the same art style as the ‘big’ Mario game of the era.  Hell, even if you argue that ‘the main Mario game always comes first’, many of the spinoffs are at least in development at the same time, so the models and art must already exist.  And it certainly provides no reason at all while say, Wario and Waluigi weren’t in New Super Mario Bros Wii (made long after the likes of Mario Kart Wii were made and released) or why Wario and Yoshi weren’t reused in New Super Mario Bros for DS (the game basically matches the style of Super Mario 64 DS, so why not take the other player characters, enemies and bosses from that game and stick them in New Super Mario Bros?)

Either way, that’s Miyamoto’s explanation for why the likes of Wario and Princess Daisy don’t appear in more story based Mario platformers.  I don’t buy the logic myself, but what does anyone else think?  Can anyone actually figured out the what heck he’s going on about or how a practically irrelevant art style difference can play such a major role?

I’m a bit of an expert on this matter so despite this being an old article I hope you’ll listen. Miyamoto generally doesn’t go anywhere near characters, games or series made by the great, late Gunpei Yokoi’s team, Nintendo R&D1, who were Nintendo’s oldest game studio. They were the creative underdogs overshadowed by Miyamoto’s world famous EAD team. R&D1 was responsible for the Game & Watch, Game Boy systems, Metroid, Mario Land/Wario Land, Kid Icarus, Mario Paint etc. Miyamoto headed the rival team, EAD, so he had no part in any of those. Both studios had VERY different creative styles,… Read more »