The Strangest Mario Crossovers Ever

Whether it be in official works or fan fiction, Mario has been in some strange situations. He’s met Sonic and raced him at the Olympics, he’s fought the likes of Solid Snake in Super Smash Bros and he’s even beat up the likes of Goku in oh too many fan made Smash Bros games to think about. But even with that said, some stuff goes a whole lot further with the weird crossovers.

Maybe it’s the authors attempt to do something interesting, maybe it’s just some kids being bored and wanting to see Mario with a shotgun, either way, here are some of the most bizarre Mario crossovers (both official and fan made) I’ve ever seen.

5. Mario Meets Halo (and others)

Also known as Mushroom Kingdom Fusion and Super Mario Fusion being over the top as heck, since in both games Mario ends up going against the forces of the covenant at some point in the story.

Unfortunately for him, that’s not all he goes against.

The zombified monsters from Resident Evil and Left 4 Dead? Yep.

The locust from Gears of War? Yes again.

How about the Metal Slug style soldiers in the ‘alternate Earth’ levels? The Commander Keen style levels?

The way he seems to casually dispatch the entire cast of Mega Man, Sonic the Hedgehog, Castlevania, the Legend of Zelda, several Pokemon and a bunch of enemies from Rayman?

Because that’s what happens, and it’s either the coolest thing ever designed or the most over the top insane idea for a fan game in existance and seen as going too far. Either way, it’s a strange, strange idea for a crossover.

Unfortunately, I can’t find the name or topic on Mario Fan Games Galaxy for this one, although it was a 2D fighting game starring a whole bunch of Mario characters, complete with multiplayer.

Didn’t make any sense, but it sure was an interesting choice of secret character.

Now admittedly, meeting Master Chief from Halo isn’t something that’s completely heard of in Mario fan fiction, so him being in this game along with Mario and Luigi wouldn’t qualify it by itself. But when you’ve got a real life Nintendo developer there as a playable character? Now that’s different. The now likely long cancelled title in question is called Super Mario Land 4, and was intended to be a sort of cross between New Super Mario Bros Wii (with four player co-op) and Super Mario Land.

One hell of a strange team up

Of course, with the added strangeness of a real life person come back from the dead to beat up Mario enemies, along with a star of the biggest franchise owned by Nintendo’s rivals. Not much was done with the idea, but it sure is a strange combination, don’t you think?

What do you get when you get one of the most horrible events in the history of the world + the Mushroom Kingdom? Super Mario World Dark Horizon apparently.

It is probably the most over the top ridiculous attempt at a darker and edgier Mario game you will ever see. It is also a complete and utter bloodbath, and has pretty much the effects of a nazi invasion against the Mushroom Kingdom with modern weapons.

And in case you thought I was making this up, here’s a trailer:

The game just gets more and more ridiculous as it goes on. Mario fighting across the real world with various guns? Check. Mario fighting and killing insurgents in the middle east before having a boss battle against Osama Bin Laden? Check, that’s in there too.

If you ever thought that the old Mario in Vice City animation was over the top and ridiculous, this game apparently makes that film look sane.

And unlike the others on the list, this is entirely official and Nintendo licensed, because their German Nintendo Magazine had some completely insane writers at one point in time. No kidding, the guys who wrote these German Nintendo comics had to be on something, the types of crossovers and plot events that happened were downright weird at best, and disturbing at worst. Yoshi teams up with the guys from Blast Corps? Consider it done!

But it didn’t end there. You had Mario fighting Dr Wily from the Mega Man series. You had Wario in his own version of a Christmas Carol. You even had Mario go skiing and find everyone randomly turns into cheese! 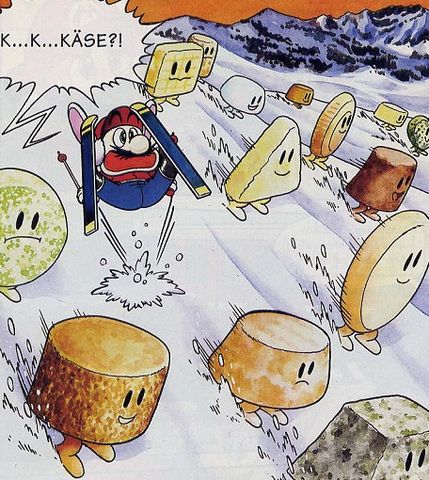 Yeah, someone wasn’t thinking right when making this.

However, where it really goes completely nuts is Super Mario in Die Nacht des Grauens, aka Super Mario in the Night of Horror. This is a very disturbing comic. It starts out fairly strange, with Mario and co living in a giant skyscraper in the middle of Brooklyn (with Link, Kirby and various others among them). Then Wario starts doing deals with demons.  Yes, that is Wario talking with a demon called Abigor as horror villains like Jason Vorhees, Chuckie and Leatherface watch the proceedings. All this just so Wario can get Peach to fall in love with him. It then goes damn crazy as monsters invade Mario’s home, and the heroes stumble across a chest reading Van Helsing, getting weapons like flaming swords, whips and a freaking crossbow. And one hell of a strange costume switch: 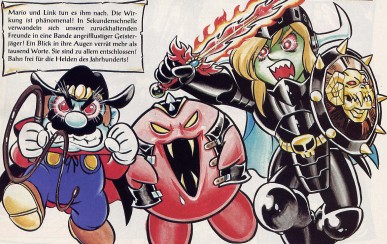 This is what nightmares are made of.

Did I mention Peach becomes a zombie who starts saying ‘your mother scrubs toilets in hell’? Or that Mario and co use dark magic to fight back the monsters in a creepy satanic worship style room called Infernum? 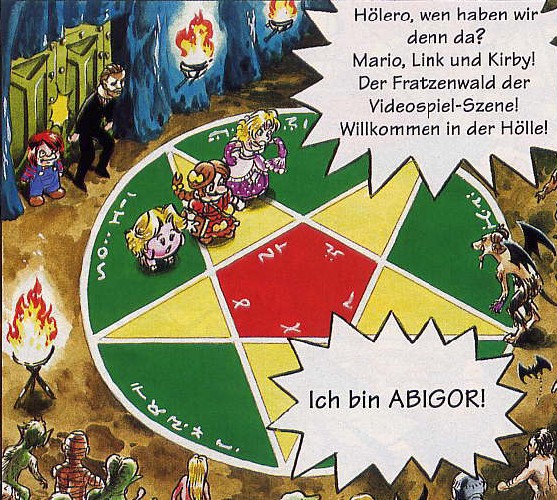 If I was just to say this comic is weird, it would be the understatement of the century. And for a Mario crossover, this is one so disturbing even most of the fan fiction can’t match it.

Technically, that’s not the only franchise it crosses over with either, Mario also encounters Sonic the Hedgehog and the cast of Back to the Future depending on what secret levels and endings he finds.

But the most standard example is the real final boss. You’ve just beaten Giga Bowser, you expect to see the Princess and then…

Why the hell am I in what looks to be part of Castlevania Symphony of the Night?

Yes, the final boss in this fan game really is Dracula from the Castlevania series, if the whole castle and ‘dark’ motif didn’t tip you off to it being a crossover already. And for a character like Mario only used to fighting Bowser in his standard easy boss battles, Dracula is one hell of a difficult opponent to defeat.

It’s also a massive Metal Gear Solid homage, since every time Mario is spotted by either a soldier or a camera, the ‘Snake found’ music starts playing and enemies start to swarm his location, attempting to shoot him with various firearms.  Here’s a video of the thing in action:

And of the full level:

It’s a pretty creative idea for a crossover level, especially given all the Metal Gear Solid style things like using a ? block in the way Snake uses a cardboard box, and the fact it uses the awesome Factory Investigation music from Kirby 64 only makes it better.

As you can see from the above, there’s some pretty strange Mario crossovers out there, both real and fan made. Is it a good idea to have Mario suddenly show up in a realistic setting full of evil monsters or end up in world war 2? Maybe not, but it sure makes for a crazy story.