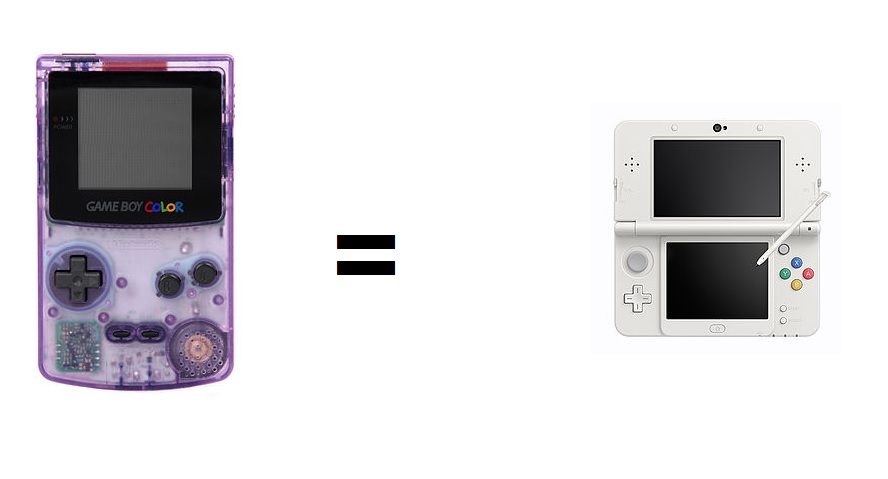 So earlier today, the New Nintendo 3DS was revealed by Nintendo.  With new features, a new and updated design and slightly better processors, it was quite a surprise to just about everyone, especially with a Xenoblade Chronicles port being announced alongside it.

But while some people are complaining that Nintendo is potentially fracturing their userbase, or that the new system is somehow some bad idea due to it having more features, I think it’d best to remind everyone that something just like this has actually happened before.

Namely, with the Game Boy Color. The situation with that system is pretty much a perfect point by point copy of the situation we’re seeing today with the New Nintendo 3DS.  Here’s why…

So while the New Nintendo 3DS has an added second analogue stick and Amiibo functionality, the Game Boy Color added its own new features too.  Like the IR port thing you could find on top of the system, the one used in Pokemon Gold/Silver/Crystal’s Mystery Gift feature:

It was also used in a couple of other games (like the Pokemon Trading Game Game and its sequel, available for the same system) too.

2. Both systems had exclusive games not playable on the older version of the console

Another similarity here, is the availability of exclusive games only playable on the later system.  Think only being able to play Xenoblade Chronicles on a New Nintendo 3DS is annoying?  Well, good job you weren’t buying games in the Game Boy era then, since near enough every major game of the time was Game Boy Color exclusive!  Like Wario Land 3…

Or the Zelda Oracle games…

Or heck, just about every major game released from 1998 onwards.  Had an old school Game Boy only capable of displaying monochrome graphics?  You were pretty much up a creek without a paddle, since Nintendo weren’t making games for you any more.  And even the games you could still play (like Pokemon Gold and Silver and Wario Land II) were designed to be just plain better on a Game Boy Color, so you were getting the worse versions all the way.

Oh, and let’s not forget about Link’s Awakening… Yeah, Nintendo took a game that was already out on the original Game Boy, added a few new features and a new dungeon and then sold it as brand new.  Can you imagine if they did that nowadays?  Or heck, if they decide in a few months to rerelease A Link Between Worlds as A Link Between Worlds DX with a few new features?  The internet would absolutely flip out over it!

This whole ‘release a new version of the same system with non backwards compatible games’ isn’t a new thing either!

3. The focus on different hardware designs/customisation

Finally, has anyone noticed the odd way that both the New Nintendo 3DS and Game Boy Color seem to have been designed around giving people as many hardware design choices as possible?  Because it’s true.  The New 3DS has all these different face/back plate designs:

And the Game Boy Color pretty much came in every colour under the sun.  Just look at some of these colours!

So in addition to the two systems having both exclusive games and features, they also seem to both be heavily focused around giving the consumer a choice about what their system looks like.  But hang on, that’s not all, is it?  After all, Nintendo didn’t just pull this ‘trick’ with the Game Boy Color and New Nintendo 3DS, did they?

Nope, there’s also an interesting comparison to be made between the New Nintendo 3DS and Nintendo DSi. New features in the form of a built in camera, check.  Exclusive, non backwards compatible games (like the whole DSiware lineup), check:

All in all, the situation with the New Nintendo 3DS isn’t quite as ‘new’ or unexpected as people think.  Nintendo have done the same thing twice before, and they’ll do the same thing again with the 3DS’s successor in the near future.  Just enjoy the new console and its games!