Wait, did I say Mario clone?

Because I meant complete rip off of the Mario series that doesn’t even pretend to be anything else.  To the point the sprites are from Super Mario All Stars and the name is even just ‘Super Mario’.  Yeah, its not very subtle.

Keep reading to see just how bad this case is.  Because I warn you, it’s absolutely sickening how arrogant these guys are to think they can actually sell this stuff.

Here’s a picture from an article showing the app in action: 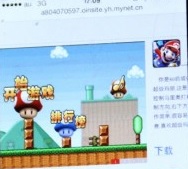 But it doesn’t end there either.  Oh no, the companies website goes far enough to put a giant picture of Super Mario Galaxy 2 on the front page to advertise their ‘work’, making it ridiculously obvious how much of a bunch of thieves they are.  And their explanation?  Well get a load of this:

There were already some similar kinds of PC-based games using flash technology. Our game is similar to those. Some parts are like the original. Some parts we’ve changed

Err, newsflash? Those were probably fan games and game mods of actual Mario titles.  They’re fan made works being given away for free and released by people in their own free time, and are extremely obviously so to boot.  Your work on the other hand is being sold for real money on the app store, using characters and resources you don’t actually have any rights to use.  Don’t you see at least a minor difference there?

Basically, fan game makers are giving away their work for free, making it clear it’s a fan work, not passing themselves off as Nintendo and supporting the company. You are on the other hand are trying to charge for stolen content, passing it off as a published game and are basically pretending to be Nintendo.

Still, at least Nintendo is apparently investigating this:

Nintendo has not approved these applications. Our legal team will investigate them from now.

And the games seem to have vanished off the app store and website.  So perhaps the legal team has already threatened to sue these thieves for their crimes.