Just a few minutes ago, I came across this interesting sounding article online.  One that was seemingly comparing Nintendo and Disney together and talking about how each was too caught up in the chasing of profit to make works that matched the artistic quality of their predecessors.

But the article is wrong.  And not just wrong, but misleadingly wrong.  In fact, it’s so damn flawed on many levels that to ignore it would be to defend the idiocy and lack of research included within.  And so here’s my response to it, complete with commentary about why none of the points raised match the reality of Nintendo’s current situation.  Read on after the break!

First up, let’s begin with the first few paragraphs.  Here, we start with a bold claim, one that aging artists rely on their original works to carry the companies they work for forward and lose relevance.  Right off the bat you can tell where this is going, another ‘rant’ about how Nintendo is somehow less relevant/popular because it ‘doesn’t create new franchises any more’. 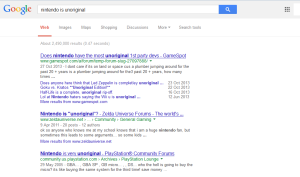 Above: Because only 2.5 million people have said the same damn thing!

Skip past the (probably accurate) Disney retrospective, and you get to the first mention of Nintendo and their franchises.  Oh guess what?  It’s gonna start with the usual cliche about Nintendo games and smartphones!  Yeah really:

The lucrative Super Mario Bros. and Pokémon games that fuel the company’s profits are shackled to machines like the Nintendo Wii U and Nintendo 3DS that are sold to just a fraction of the mass audience playing games on smartphones.

Yes, it’s this again.  Fortunately, it’s only a very small aside part of the article.  But none the less, let me make something clear:

Nintendo’s games don’t need to sell as many copies as smartphone games to make as much or even more money.

The rush to ‘smartphone’ and ‘tablet’ gaming seems to forget that the best selling games here sell because they’re both pretty good games (which Nintendo’s also are)… and being sold at about 2 dollars a piece.  I mean, a lot of people play Angry Birds, right?

Know how much that costs?

On the iPhone, 69 pence.  On the Google Play Store, absolutely NOTHING! 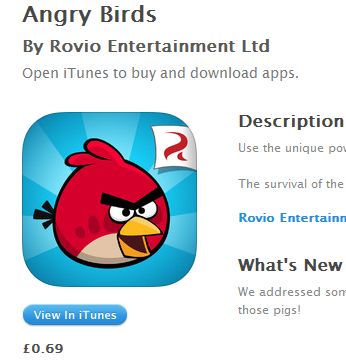 Above: See that price in the left corner?  That’s how much this game is actually worth.

People aren’t stupid.  They know that 69p is a really low price for the game, and that looking a gift horse in the mouth (aka turning down the free version if they’ve got an Android system) is insane.

Now look at Nintendo.  People would definitely buy Pokemon X and Y for under a dollar.  Heck, they’d even buy New Super Mario Bros 2 for under a dollar (or get it for free).  But even if the game ‘sold’ about ten times more than it did on the 3DS, it’s not a wise financial decision.

Because selling their games for 50 pounds or so on their own consoles makes them more money.  It’s easier to make millions or even billions selling a game for a decent price on your own hardware than it is sell 50 times more copies on the app store for pennies. 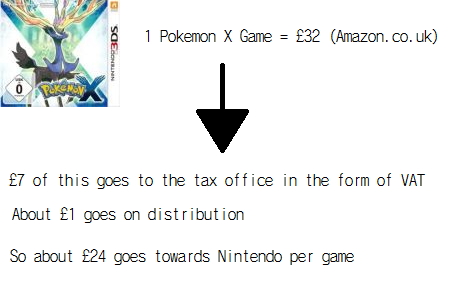 On the other hand, given that Apple takes about 30% of a developer’s sales revenue when you publish on the app store, the likes of Angry Birds is likely only making about 40 pence per sold ‘copy’.

Nintendo would have to sell 60 times more copies of their 3DS games on the app store to make the same money back.

And hence to make back the same money as they have from X and Y so far (4 million copies sold on 3DS), they’d have to sell… about 240 million copies.

Basically, that means they’d need to sell to 4 times more people than there are currently living in the UK.   Or about three quarters of the entire United States population.  Did I forget a simple additional factor here?

Sure I did.  They’d have to sell to this amount of people… in under a week.  See why the app store game model is so crap for large publishers/developers now?  Yeah.  Whatever future Nintendo CEO takes them down that path is probably gonna sink the company.

Oh, and don’t even bring up ‘freemium’ crap.  If Nintendo ever tries to profiteer off in game transactions/in app purchases in the way the likes of Zynga’s games or Candy Crush do, I will simply stop buying their products.  The kind of ‘wait half an hour or pay 10 dollars to restart the level’ junk that many app store games seemingly have is the kind of horrendous, manipulative and downright evil game design that needs to die horribly before the year’s out.

But that’s not the main point of the article, so back to the critique.

No, what they’ll talking about is characters and how Nintendo rarely introduces new ones.  To quote:

You have to go back to 2001 and 2002, when Nintendo introduced the world to Pikmin and Animal Crossing respectively, to find a moment when the company created new characters that introduced players to new types of games.

Except in actuality, this isn’t true.

Here is a list of all Nintendo published ‘franchises’:

You notice something?  How about all the ‘new’ Nintendo series introduced in the last few years?

Heck, you could probably even count Professor Layton, considering it’s only ever been on Nintendo systems and smartphones and is mostly published by Nintendo.

But hey, I guess you couldn’t be bothered to mention any of those right?  Oh, you follow the internet hivemind logic.  The one that discounts any new series as a ‘new IP’ if it doesn’t sell ten million copies and isn’t discussed on a bunch of internet forums.

Above: People love to pretend stuff like this doesn’t exist and that it’s only been Mario, Mario, Pokemon and the odd Zelda for the last ten years.

Then again, how the heck did you miss the likes of Band Brothers, Xenoblade and Drill Dozer?  Or even Starfy?  Some of those were in Super smash Bros Brawl for goodness sake, and there’s been a huge amount of people desperate to see Shulk or another Xenoblade character included in the upcoming Smash Bros titles too.  How do you miss that?

And in case you complain those series have no new iconic characters.

Dillon.  Mallo.  Shulk.  Jill (from Drill Dozer), Barbara the Bat (you know, that character who played the guitar in Brawl).  Heck, how about Golden Sun and its characters, like Isaac?  He was in Brawl too.

Above: So none of these characters exist at all?

The company has seemingly lost all willingness to experiment freely with its characters. Mickey Mouse and his pals were useful for Disney because they let the animation team tell so many different stories with varied artistic styles. The vibrant, musical Fantasia was quite different from the seven-minute slapstick-fest “Haunted House.” Until recently, Nintendo took a similar approach with Mario and its other regular characters.

The muted palette of Super Mario Bros. 3 gave way to the thick-lined primary colors of Super Mario World, which morphed into the crayon wash of Yoshi’s Island. The staid look of The Legend Of Zelda: Ocarina Of Time gave way to the hallucinatory Majora’s Mask. The lifeblood of Nintendo’s internal development was a willingness to take artistic risks.

Which still exist.  Yes really.  Let me illustrate this with a couple of trailers for very, very different, unique takes on Nintendo franchises. Like Zelda and it’s changing up every single installment.

Because we all know how similar Twilight Princess, Skyward Sword, Spirits Track and Link Between Worlds are in artistic direction…

But even outside of Zelda, the games aren’t all the same in style.  Like Pokemon.  Which got a brand new 3D style with Pokemon X and Y, completely with revolutionary gameplay changes and series overhauls.

Or how about Mario & Luigi Dream Team?  The game which introduced some super detailed sprite graphics in a unique style to the world of RPGs, and is an aesthetic masterpiece with graphics and music almost unmatched by any other?

No new unique artistic directions and styles?  You’ve got to be joking.

Continuing on, the article says:

Today, Nintendo has settled into a factory-style production of new games starring those old characters. There have five games in the New Super Mario Bros. series of run and jumpers, and all of those games, while fun in their own right, are indistinguishable from each other. No experimentation, just repetition, a familiar product that can be pumped out to keep the profit machine running. Nintendo has been explicit about its shift to factory production.

What it doesn’t say however is that this ‘factory style production’, only applies to the New Super Mario Bros games.  Which are just one small sub series in the hundreds that Nintendo have.

That’a not to defend New Super Mario Bros 2, since it does have its faults, but come on.  It’s one game.  And do you know what?

It’s not even a new thing.

Exact same idea.  A rushed out sequel meant to capitalise on the Mario brand with little in the way of artistic ‘effort’ put in.  Yet people still think rushed Mario games are some modern ‘innovation’ than Nintendo is responsible for.  Guess they don’t remember Vs Super Mario Bros, Super Mario Bros Special or All Night Nippon Mario Bros either, three more games which were copy and paste sequels to the original Super Mario Bros title.  Or how about Super Mario Bros for the Game & Watch?  Or even worse, the Game Watch (no typo):

So that kind of kills the whole ‘Mario games are only now bland’ thing they had going.  But there’s more!

Beautiful, fun video games starring strange, visually appealing characters are what made the company once upon a time, and it cannot be afraid to let its own developers express themselves.

Above: More creative than so much that 80s Nintendo created.

Or is that not creative enough for you?  Okay then…

Above: A monster made of soda?  Nah, not creative in the least…

Nintendo can recapture the creative fire it used to have and win back some of that audience it’s lost in the process.

That’s not enough?  Well how about Luigi’s Mansion Dark Moon?  That game is one of the best, most inventive games in recent history, and I’d say far better in a lot of ways that most so called ‘original’ indie games on the market.

Honestly, the article is ridiculous.  Nintendo losing their creativity?  Absolute tosh, as anyone who’s played more than New Super Mario Bros can attest to.  Nintendo games not having the artistic freedom they once have and having bland art styles?  Nonsense, the likes of the Zelda series has a new art style in every single game.  And the likes of Luigi’s Mansion Dark Moon and Mario 3D World kind of blast holes in the theory that modern Nintendo games aren’t trying to be daring or imaginative.

What an absolute joke of an article with no factual basis in reality.

Article thumbnail by someone on Mario Monsters.com