Opinion; Why Nintendo Should Never Consolidate Home Consoles and Handhelds…

With the Wii U being such a failure and the 3DS such a success recently, a common thought by a lot of journalists seems to be that Nintendo should merge their home consoles and handhelds together, producing a new system with the qualities of both instead of two seperate machines aimed at different markets.

But personally, I think this is a terrible idea, and here’s why…

1. Either Power or Affordability would have to be sacrificed

Really, this is one of the biggest problems any hybrid system would have. Namely, the sacrifice which would have to be made in regards to either system power or system price.

Think about it a minute. When it comes to these two things, one has to give to make a system practical.  For a handheld, this is usually ‘power’ in a technical sense, since the costs of trying to cram all this technology into a tiny case and having it available at a reasonable price (aka not over a thousand dollars) kind of means companies have no other option.

Having both types of system avoids this problem.  The home console can be made to run off mains power and fit in a much larger, bulkier casing in order to have all the latest high end tech, and the handheld can be made with cheaper components and with specs resembling a system from about two generations ago in order to provide a practical machine to play video games on the go and not break people’s wallet in the process.

Not having this divide would put Nintendo in an awful position.  Do they cut down the technology so it can be cheap to make and somewhat portable, giving us a system not much more powerful than the existing 3DS?  Because if so, then they’ve pretty much cut themselves off from all third party support and now have nothing powerful enough to run a truly ground breaking new Mario or Zelda title on.  After all, you can’t run Mario 3D World on an iPhone.

Above: Some of the types of games we’d lose if Nintendo only made a console with handheld level tech.

Or do they cut down the portability (see later in the article for why that’s a bad idea) and ramp up the price in order to fit all the best technology into a tiny machine?  Because if that’s the case, then they’re pretty much guaranteed to have a total failure on their hands instead, people don’t like paying through the nose for a video game console, especially not one supposed to be portable.

Just ask SNK what happened to the Neo Geo.  Or Bandai about the WonderSwan.  Or heck, Sega about many of their handheld games systems, like that Sega Genesis thing that cost a fortune, lasted about an hour on six batteries and attempted to cram a full home system into a tiny box.

And no, before you ask, this is nothing like Apple and the iPhone/iPad/whatever.  Those devices have a few benefits that keep them selling that Nintendo systems don’t have, namely:

The networks heavily subsidising the costs in order to get more customers; Nintendo’s probably not getting this sort of deal from anyone.

Their use as a status symbol.  Games and game systems are this too, but they don’t quite have the same appeal to many people.

Put simply, Nintendo would lose something big by merging these divisions.  But it’s not the only issue they’d face with this often quoted and flawed ‘business plan’…

2. Nintendo would lose lots of chances to impress people with new games

Oh no, they’d also be in another dilemma when it comes to their games.  Namely, the one about whether they publish only half the titles they once did, or whether they get slammed for ‘milking’ them instead.

Above: Do we want even more of this?

If people aren’t sick of too much Mario already, they will be when there’s a new game every month.  But hang on, what if they didn’t?

Then they’d lose out on much of their current sales ‘success’.  Think about it a second.   Mario Kart 7 was a big success in 2011, and Mario Kart 8 will be a big success in 2014.  If they only had one system on the other hand, we’d be going whole generations with just one Mario Kart game, one Mario game, one Zelda game, one Pokemon game, etc.  Nintendo would either have to release games on a glacial Nintendo 64 style release schedule, or end up with even more end of Wii lifespan style game droughts between major releases.

Pick your poison.  ‘Milking’ or droughts.

Another factor people fail to consider is the effect on third party support.  I mean, we already have a problem with it being nearly non existent on the Wii U and (outside of Japan) heavily lacking on the 3DS.

But guess what everyone?  Merging the two together just gives the Nintendo hating third parties another reason not to publish games on their systems!  After all, these are the same companies who treat Nintendo like they shot their dog ten years ago and act like they’re perpetually boycotting the company, and the same ones who seemingly think handheld systems are a dying breed not worthy of any new games.

And so by Nintendo announcing that both their systems will become one, they’ve just killed off the last remaining such support they even had, and gave their haters in the ‘industry’ another reason not to publish anything on their platform.  Weaker console which acts as both home console and handheld?  Sounds exactly like something the industry third parties would avoid with a ten foot bargepole, and that’s even without the name Nintendo being attached to it!

So don’t expect Nintendo’s third party woes to get better if they took on this strategy.  Instead, expect them to just fall off a cliff and get even worse than they already are.

4.  Battery life and practicality could be god awful

And in case it wasn’t already looking bad enough, let’s not also forget the very obvious considerations of battery life and portable practicality, two things a handheld system desperately needs to do well.

They’re also two things a hybrid system can’t do well.  If it’s powerful, it’d probably have a terrible battery life of an hour or so, making it a useless handheld.  And if it’s got to do both home console and handheld games, the ergonomics and practical considerations of actually holding it seem like hell too.  Because let’s face it, something the size of a Wii U GamePad ain’t fitting in anyone’s pocket, nor would it ever be a practical choice for a device to bring with you on a daily commute. 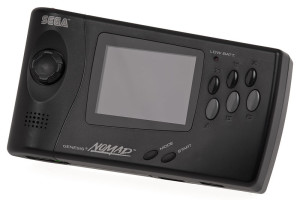 Above: The Sega Nomad, what you get for trying to do what internet critics are asking.  A handheld console which guzzles up batteries, last about two hours and costs a fortune.

Doesn’t that sound more like the kind of awful ‘handheld’ systems Nintendo’s rivals used to put out than a modern successor to the 3DS and Wii U?  And to think, we already complain the 3DS only has a battery life of  a few hours…

Finally, we come to the obvious thing.  People want different things with the two types of game systems.

Such as, different hardware features.  Motion controls might be a great thing for a home console you play in your own house with plenty of space to move around, but they’re pretty awkward to use in a public place, hence why the 3DS gyroscope is one of the least popular features of the system.

Or how about the gameplay in the games themselves?  Handheld Nintendo games tend to be more convenient to play in short bursts of about 1o-15 minutes, with generous save points, shorter levels and a ‘pick up and go’ design mentality. Home console ones tend to be giant epics you play for hours on end in front of the television, often with lots more cutscenes, story and long, drawn out puzzles and action sequences.

Above: A typical handheld experience and a typical home console experience.

Nintendo making a console with two roles would mean they’d have to design both the system and games to be one of two things:

A: Either a complete portable/home console experience, which only functionally works as the other.  So instead of getting both pick up and play titles like Mario 3D Land and more extensive ones like 3D World, we’d ONLY get portable or home console style experiences.  Probably the former given Nintendo’s overly Japan based focus and Japan’s preference for handhelds over home consoles.

B: A merge jack of all trades that tries (and most likely fails) to provide both a home console and handheld experience within the same games and system.  Or in other words, one which would fail except for Pokemon, Mario Kart and Smash Bros, the only games I can think of which work equally well played in short bursts on a handheld and for long periods on a television. 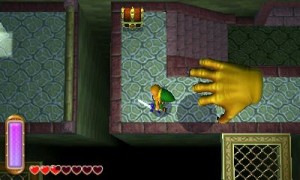 Above: As great as this game is, I don’t want all Zelda games to be like in terms of atmosphere or difficulty.

Which concludes my article.  Nintendo should never even attempt a system that acts as both a home console and handheld at the same time, and should most certainly ignore all the short sighted critics and ‘analysts’ who constantly say otherwise.  Otherwise we’ll likely get a poor system which fails to deliver on any one thing and which does even more damage to Nintendo’s name than even the Wii U.

Wii and DS led about 3,5 years. Nintendo CAN lead both.

“Do we want even more of this?”
Yes