Opinion: The Six Most Disappointing Bosses in Mario History

A good video game boss should be many things.  It should be designed so it fits the level at least somewhat thematically, it should be a decent challenge to top off the level and it should generally be designed in a way that it doesn’t come up off as an utterly boring character.  And hence why the Mario series has never been known for great boss battles, it usually succeeds at least at those basic criteria.

But it doesn’t always get things right.  So these are the six most disappointing bosses in Mario history, six bland bosses that really felt like a let down after the build up of a whole level or even game.   Let’s begin…

First on the list, the Harsh Possessor/staircase boss from Luigi’s Mansion 2.  Why is he here?

Because of a few important things.

Namely how he and his mission are just completely out-of-place in the setting and add nothing to it enjoyment wise, and how the boss concept in general is just such a damn drop in quality from the first one.

I mean, boss 1 had you fight that spider in the Gloomy Manor Cellar, in a boss battle with multiple phases, different weaknesses throughout the battle and a level of difficulty and puzzle complexity that would make most later Zelda bosses seem simple by comparison.  It was almost a masterclass in good game design.

For starters, it’s a freaking staircase.  In a mansion which until now has been predominantly themed around plants and water mechanics.  What does this thing have to do with the setup?  Absolutely nothing!  Does it feel completely out-of-place?  You bet! 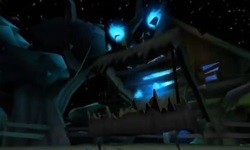 Above: Oh dear! Call that staircase a boss? Surely King Boo can come up with better than that, maybe a bucket or perhaps a really nasty fridge! – Cranky Kong, paraphrased to fit the scenario

But even when you get over the lame theme, you end up realising that the boss just doesn’t even do anything compared to any of the others.  The last one?  Destroyed parts of the room, generated enemies, changed weakness, shot acid… the others in the game?  Learn new things as you go along and keep the battle varied.  This one on the other hand just fruitlessly lunges at Luigi like some wild beast, maybe shoots fire once or twice and jumps into the air at a ridiculous slow pace, upon landing becoming vulnerable to attack.  People likely have more trouble with your average mini boss than this guy.

Add a boring mission design with an extremely tedious gimmick (don’t we all love randomly choosing stairs to climb and sliding back down upon making the wrong choice?), and you’ve got a huge disappointment of a boss and mission.  It just doesn’t rank higher because it’s only the second boss in the game.

Next up we have a boss who is pretty much expected on every ‘badly designed Mario boss list’ in history.  Yeah, Topmaniac was never exactly a great boss character by any definition of the term (heck, he’s so pathetically weak Nintendo didn’t even bother putting him in the sequel like nearly every other boss in the game), but what takes the cake is his reappearance in a certain later galaxy…

Because you see, to a degree, something like Topmaniac (aka a pathetic boss that dies in three hits and doesn’t do a whole lot) is kind of expected in the first few worlds.  That’s sort of called a difficulty curve, even if the design of Topmaniac himself was so poor that he ended up being about ten times easier than he probably should have been.  What’s not acceptable (and what’s an utter disappointment), is something like him as a boss in a difficult level in the final world.

Cue the Dreadnaught Galaxy.  One of the most badass levels in the game, this giant space station feels like it may as well be the Mario equivalent of the Death Star, reuses the epic as all heck Battlerock music and has you dodge a giant array of enemies, lasers, smashers and other traps.

And then you encounter Topmaniac in the third mission.  What’s changed?  Absolutely nothing!  He still goes down in about twenty seconds tops, still has almost zero way to kill Mario easily and is still slow enough that someone could outrun him with merely a slightly fast stroll.

Above: What a joke

To add insult to injury, the comet mission is literally just doing the mission with him in it as a speedrun.  Because absolutely anyone is going to take long enough against this guy to even remotely run out of time. Can someone tell me why this character even comes back as a boss so much in this title?  What kind of idiot would seriously give most stars to the least effective of his underlings?

For being a joke that somehow manages a comeback about ten worlds later, Topmaniac enters the list at number 5.

To understand why this boss sucked, let me refresh your memory in regards to what you had to go through to reach him.  You’re on dome 6 out of 7.  You’ve fought through multiple worlds filled with dramatic boss battles, and you’ve now battled through Bowser Jr’s Lava Reactor and are expecting something epic.  I mean, the last couple of bosses you fought in these types of levels were Bowser himself, Bowser Jr and freaking Megaleg.  So you keep going, expect an awesome boss fight just around the corner…

And you get a fight with King Kaliente instead.  Not a difficult fight, one that’s basically identical to the one you had in Good Egg Galaxy near the start of the game.  Okay, the platforms now a sink bit and the boss looks like he’s been thoroughly barbecued for a couple of hours, but the battle is pretty much exactly the damn same as something you did at least 15 hours earlier.  In place of something actually FUN. 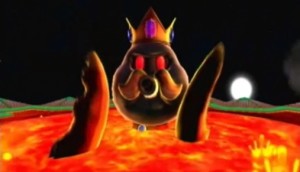 Above: How is this guy qualified to guard a Grand Star again?

Forget the Harsh Possessor in Luigi’s Mansion Dark Moon, at least that came about after only the second mansion.  No, to put King Kaliente as the main world boss in the second to last area in the game is pretty much like making Boom Boom the world 7 boss of Super Mario 3D World, an utter disgrace.  Pathetic.

Now as far as final bosses go, New Super Mario Bros 2’s wasn’t quite as terrible as people think.  Okay, it’s not going to win awards by any means, doesn’t measure up to the battles in Wii and U and is just another giant Bowser ‘chase’ sequence, but it is at least a bit more exciting than the one in the last handheld New Super Mario Bros game and did take a tiny amount of effort to put together.

But then you get to the final boss in world Star. You battle through the world, get through one hell of a final castle and meet…

Oh cool you say, it’s not Bowser again and there’s actually a boss this time!  This could be neat…

Above: It’s just like the old days, reusing the boss, changing its color and pretending it is completely new. – Cranky Kong

Then you realise he’s just a palette swap of Bowser, with the exact same attack pattern.

Okay, he looks different.  His hammers have been replaced by identical looking bones and the platforms in the vertical tower portion are a tiny bit smaller.  But that’s literally all there is to differentiate him. They were that damn lazy that they just reskinned the last major boss and called him brand new.

And now, here’s the penultimate spot on the disappointing bosses list.  Which goes to the Donkey Kong Country Returns main villain, Tiki Tong!

Why does he get listed here you may wonder?  For one simple reasons:

That’s all he is.  The giant head and hands boss gimmick?  Done to freaking death by Nintendo in so many other games: 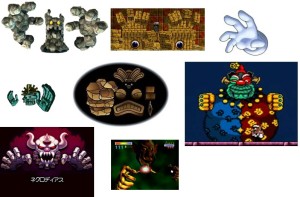 Above: Just a few cases of the concept being done before…

But while his core gameplay design is certainly an overused one, there could have been a redeeming feature.  Namely, he could have had an interesting design and personality that somewhat offset the generic boss battle.  Did he?  No way in heck.  Not only is his design completely non threatening compared to most other Nintendo villains as a whole (King K Rool looks ten times cooler than he does), but he just doesn’t have a personality.  He has no motives, no plan, no real reason to exist… he’s just there so the player fights someone at the end of the story despite getting no explanation to what’s going on. 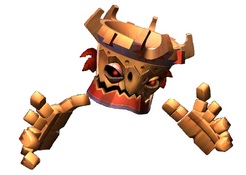 Above: Truly an imposing, interesting design![/sarcasm]

All in all, a poor final boss and villain concept for an otherwise amazing game, and definitely worthy of a spot on this list.

Finally, after all those other entries, you’ve got this one.  Bowser from New Super Mario Bros 1.

So why is he listed as the most disappointing boss ever?  I mean, he does have Bowser Jr fight beside him…

Is there an epic battle against him where you have to actually fight?  Like in New Super Mario Bros U or Super Mario World?

All you need to do is run under him when he jumps, and hit a switch.  That’s it.  You technically don’t even need to bother with Jr, he falls to his doom along with his dad when the switch is pressed.  Heck, you don’t even get a great ending or defeat scene either, you just hear him hit the floor below with a thud, and see a tiny cut scene of Bowser Jr dragging the unconscious Bowser away at the very end of the ending cut scene.

Above: For a final boss, it’s kind of pathetic.

It’s just a complete and utter anti climax after that absolutely fantastic castle found before him. And compared to near enough every other ‘final boss’ in a Mario game, it’s just a boring, unoriginal concept which isn’t particularly exciting or epic and is only topped by a perhaps even more dull ending.  So the final battle in New Super Mario Bros 1 concludes my list.

And there’s my list of the most disappointing bosses in Mario history.  Do you agree with them?  Disagree?  Post your thoughts as a comment below or in the forums today!

To me,the most disappointing boss fight is in Super Mario 3D Land.I think it’s in world 5,where you hafe to fight Pom Pom.THE FLOORS ARE ON FIRE.