After a long and difficult boss battle, there’s nothing more satisfying that watching your hated enemy go down dramatically.  But while explosions, ludicrous gibs and other traditional ‘death’ scenes are common in video games, there are some in Nintendo’s titles that are absolutely awesome beyond even those.  So here they are, some of the best death scenes in Nintendo games…

First up, is a death scene that kind of took the Mario fanbase by storm back in 2005 or so for just how brutal the whole thing was.  Yep, you guessed it.  It’s that moment where Bowser falls in lava and literally has his skin melt off in the most disturbing way possible:

Is it as blatant or dark as some other examples here?  Obviously not, but the way it happens in world 1, in a way completely uncharacteristic for Bowser (who usually survives lava pits intact) and has Mario say something like ‘that’s a so nice!’ as Bowser flails in agony just makes it oh so awesome and memorable.

As a skeletal shark proven completely impossible by real world biology (due to them not having bone based skeletons to begin with), the boss Kingfin in the Mario series is already kind of an odd creature.  But while its scientific impossibilities are all well and good, do you know what really stands out about it?

The fact this thing goes down in the most spectacular and somewhat ridiculous way possible.  As in, the skeletal shark literally EXPLODES upon defeat, as you can see in the below video:

And it’s not exactly the RPG style ‘explodes into light’ cartoon explosion either, it’s an actual bomb style self destruct complete with pieces of its skeleton flying in every direction.  Heck, the skull itself not only falls off, but then explodes again, into even smaller pieces.

So for being the only video game shark to go up in a dramatic fireball like a malfunctioning Ford Pinto (as well as the only one to actually have electricity going through it as it falls to pieces), Kingfin makes the list.  Made of Explodium indeed.

Come on, just his pose upon defeat is hilarious: 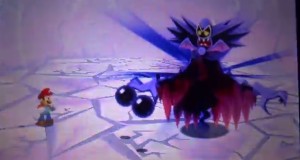 And indeed, while the true ‘death’ part (after the battle) is a bit disappointing, the way he actually explodes in battle is rather fun to watch in its own way…

Because come on, the whole thing looks like something from a Looney Tunes cartoon:

The fact he even says ‘bye bye’ before falling off screen with a loud crash just adds to the comedic effect.  The fact it’s a metallic crash of robot parts and bolts flying through the air kind of helps too, if only because it says ‘this guy is most definitely not coming back’.

2. Ganon’s Impalement – The Legend of Zelda The Wind Waker

Well, you knew this was coming, right?  It’s probably the most ‘epic’ thing in the game, and one of those parts of the story that Zelda fans love using to defend the game against claims its for kids.

It’s also not the only time a villain has been defeated in such a brutal way in the franchise.  Just ask Ganon in Ocarina of Time, Ganondorf in Twilight Princess or Malladus in Spirit Tracks.  Still, you have to admit, it’s one hell of an cool way to finish off a villain…

The fact he gets turned to stone while still grinning just happens to be the icing on the cake for such a fantastic boss death scene.  And so everyone’s obvious expectation makes the list.

As for number 1, well, that’s something else entirely…

And in first place is…

This.  Probably the most over the top boss defeat you can possibly ever experience.  Namely, Dogadon (the dragon)’s defeat in Donkey Kong 64, after the fight with Chunky in Fungi Forest.  Just watch it for yourself:

Holy heck, that’s one brutal boss ‘death’ scene.  You see it get splattered into the wall, having light beams fly out at every angle, sink into the lava, look at itself burning up in flames and then gradually sink under as smoke rises from its remains.

Wow Rare, that’s definitely a way to finish off a boss fight.  Probably nightmare fuel to a couple of gamers of the day too, especially given how over the top the whole thing is.

And so those are what I consider some of the best villain ‘deaths’ in Nintendo games. Think I missed some obvious choices out?  Disagree on the placements of any items?  Then comment below or at Nintendo 3DS Community.com today!

What about in Metroid Prime 3 !!3SPOILER ALERT3!! when you fight that one Ice Guy that used to be your buddy but became corrupted. At the end he ends goin all Rock Edge on himself except with ice (If you’ve seen the animation of Rock Edge in X or Y) then to be sucked up by Dark Samus seems pretty messed up.
ORRRRR, what about in Kid Icarus Uprising, SUPER DUPER END OF GAME SPOILERS!!! Hades gets completely obliterated by the Super Cannon.

No Kirby games? Those are always so epic