So here it is, my list of four more important game design features that all Nintendo games should have,

Wait what?  Commentary in a video game?

Yeah, I really do think this would be amazing feature to have as default in more video games.  It’d work like the episode commentaries in various TV show DVDs, like the ones included on the DVD releases of each Simpsons season. 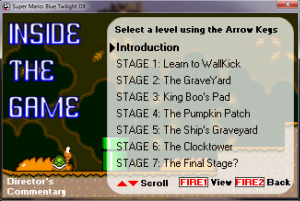 About: Super Mario Blue Twilight DX’s system should be an inspiration to Nintendo.

But why would this be useful?  Well, two reasons actually:

1. It’d be a nice way for amateur game designers and academics to learn from the best, using Nintendo’s interesting level/boss design comments as the basis for improving their own knowledge of video game design and what makes a good game.

2. We’d get to hear all kinds of interesting stories from the game’s development (that wouldn’t fit in Iwata Asks) as well have a fun way to see the intriguing background details and easter eggs the devs snuck into each part of the game during development.  Think about all the cool stuff we probably don’t yet know about Luigi’s Mansion Dark Moon, the types of things the actual development team themselves could teach us about the design process and the game’s different levels and features.

So to start the list, I’d like to see developer commentaries in at least some future Nintendo games, preferrably implemented in a way similar to how they were in Super Mario Bros Blue Twilight DX.

Talking of Super Mario Blue Twilight DX for a second, there’s also another clever little thing it included that I’d really like to see in more Nintendo made titles.

What was that you may wonder?

Holiday mode content.  Seasonal bonuses.  Stuff that changes based on the time of year in which you play the game.

Blue Twilight DX did this really well, by actually have all new exclusive levels only playable (initially) at a certain time of year.  Ob Christmas, you got to play a really neat little ‘side story’ involving Mario’s hunt to get back the stolen Mushroom Kingdom Christmas Tree star.  With new graphics, enemies and music:

On Halloween, you got the ‘true’ final level, complete with a fight against Dracula from Castlevania:

Heck, you even got to enter Green Hill Zone and fight Sonic on April Fool’s Day!

Yet while most other games don’t quite go this far on different days of the year, quite a few of them at least do something to mark the ocassion.  Like say, having snow on the ground and Christmas decorations up when you play on Christmas Eve and Christmas Day.  Or having falling leaves and creepy Halloween decor on Halloween.

So I’d really like to see something like this become a standard in Nintendo’s own games too.  For example, can you imagine how neat it’d be if like in Sonic, playing Mario 3D World on Christmas turned the kingdom in a snowy winter wonderland complete with Jingle Bells and other Christmasy songs playing in the background?

Imagine how cool for example it’d be if playing Luigi’s Mansion Dark Moon on halloween unlocked a new mansion or something to celebrate the very appropriate time of year?  If playing on Christmas added visual touches like Christmas Tree and lights in Gloomy Manor and a familiar figure on a sleigh flying past in the background in places like the Secret Mine and Treacherous Mansion?

New Super Mario Bros 2 could have these songs play in certain levels:

Heck, do you know what?

I’m actually surprised Pokemon hasn’t done anything like this yet.  It doesn’t seem too unexpected for say, Halloween to make Ghost and Dark type Pokemon appear in more areas, right?

Or maybe to have certain Pokemon only catchable on Christmas, New Year’s Day, Halloween, etc…

That’s how really to do event Pokemon, not this silly wifi or machine distribution crap.  Heck, maybe the theme of the event Pokemon can be based on the celebration too.  So the Christmas one could be something from Christmas related folklore (no not Father Christmas/Santa Claus, maybe something like an elf Pokemon or one based on Rudolph), the halloween one can be something with a horror theme (maybe the Headless Horseman from the Legend of Sleepy Hollow), you could even have a joke clown like Pokemon on April Fool’s Day or something.  Give people a real incentive to keep replaying their favourite games on all different times of the year.

Not much of a new suggestion this one, but I think it’s really time that Nintendo accept that difficulty levels are a necessary part of any modern video game and move to accomodate this.

And no, game ‘balance’ does not make difficulty levels a useless feature, like Miyamoto seems to think.

Just stop fighting it Nintendo, and just add difficulty levels like everyone else does for good reason.

Finally, the last major feature I think Nintendo should have in their games now is one that was at one time seen as standard within the industry, the New Game Plus.

What is this?  Well basically, it’s an additional version of the main game you unlock for beating the final boss that adds new challenges, level designs and ideas to the mix.  Zelda 1 did this really well with the Second Quest, which added all new dungeon maps, some new enemies (like Stalfos that shoot their swords at you and Bubbles that permanently disabled your sword until you hit one of the opposite colour) and a redesigned overworld with new dungeon/shop/area entrances and things.  It was glorious, and basically doubled the length of the game once you beat it.

And the remakes of Ocarina of Time did it well too, with the 3DS game including the full Master Quest mode (aka redesigned dungeons, mirrored world and double damage) being unlockable when you beat the game for the first time.

Unfortunately though, it seems that for the most part, New Game Plus modes in recent games haven’t been as good any more.  Oh sure, exceptions do exist (the European version of Luigi’s Mansion 1 upgraded the Hidden Mansion to a full New Game Plus thing with tons more enemies in rooms, boss battle changes and a mirrored mansion), but generally it seems the only thing most recent Zelda games do is the whole double damage cliche with minimal other things.

Above: The PAL version of Luigi’s Mansion 1 had Luigi ride on the freaking Poltergust during a New Game Plus boss fight!

Indeed, the only possible exception of a half decent New Game Plus in recent years is that Hard mode in Mario & Luigi Dream Team, which at least multiplied the damage by about ten, limited you to ten of each item, stopped you continuing battles after defeat, changed giant boss attack patterns and drastically edited the Boss Rush before giving you a few minor changes in the ending.  But even that didn’t really go far enough.

What Nintendo needs in future games is a good New Game Plus mode.  For platformers and action adventures, this should be a harder difficulty version with remixed/redesigned levels, new boss attacks and patterns and crueler restrictions.  For RPGs, it should be that plus the ability to keep gear and upgrades gained the first time around.  And in all of them?

Screw double damage.  No, you want hard?  Make it decuple damage.  So in other words, every attack does ten times its normal amount of damage.

Imagine how scary a Zelda game would be if in addition to redesigned dungeons in the New Game Plus and new boss patterns, even the Keese took off five hearts per hit.  And is an Iron Knuckle scary now?  Oh just wait for the hell of it taking off the equivalent of FORTY hearts worth of damage.  So in other words, every one of their attacks is now a one hit kill.

And then you see that the redesigned room is both a quarter of the usual size, and now has a whopping four Iron Knuckles in it!  That’s a real ‘expert’ challenge.  Not this crappy ‘Hero Mode’ where the most powerful enemy does about four hearts worth of damage because Nintendo’s too scared to genuinely challenge players.

Put New Game Plus modes in more games and make them a combination of Master Quest and Dream Team’s Hard mode, and that’s should a real cool bonus for beating the game the first time.

Well, that ends the list. Developer commentaries, holiday modes, difficulty levels and new game plus features are the things I think should also be made default in all Nintendo games.

But what do you think?  Would you want all this stuff in more Nintendo made titles?

I completely agree with the developer commentary and choice of difficulty. There are plenty of people who really want to get into the gaming industry and I bet a developer documentary on the hardships and details about creating levels, characters, and enemies would benefit anyone immensely. The choice of difficulty is one I really hope Nintendo will start considering for more of their future games. I kinda hate it when a game is too easy. It’s more fun to challenge yourself in my opinion. That’s 1 of the reasons why I like Kingdom Hearts so much cus proud mode is… Read more »

Developer commentary could definitely be a massive benefit, for both fans and critics alike.

And difficulty levels would indeed stop the game’s challenge being either too high or too low, so it’d definitely be useful there.

Thanks for your comment! And I guess more so for the compliment at the end of it!

Seasonal content is definitely something I would love to see on Nintendo games. They can do a few for free, and sell the other ones. The fans are always there to back them up.

Yeah. I’m kind of surprised Nintendo haven’t included stuff like this in any games to be honest. Seems like something they would do.

[…] But what do you think?  Would you want all this stuff in more Nintendo made titles?(source:nintendo3dsdaily) […]