Well, this is one move that’s annoyed a lot of people on Youtube.  Apparently, Nintendo are using Youtube’s ID system to claim monetisation rights on any videos with Nintendo game footage in it, such as Let’s Plays and other such things.  Some people hit by this include Youtube LPer Zack Scott Games and Game Explain.

This has not gone down well with those affected.  For example, here’s what Zack Scott said to his Facebook page readers about the issue:

I just want to express my feelings on the matter of Nintendo claiming not just my YouTube videos, but from several LPers as well.

I’m a Nintendo fan. I waited in the cold overnight to get a Wii. I’m a 3DS ambassador. I got a Wii U at midnight when I already had one in the mail. I’ve been a Nintendo fan since the NES, and I’ve owned all of their systems.

With that said, I think filing claims against LPers is backwards. Video games aren’t like movies or TV. Each play-through is a unique audiovisual experience. When I see a film that someone else is also watching, I don’t need to see it again. When I see a game that someone else is playing, I want to play that game for myself! Sure, there may be some people who watch games rather than play them, but are those people even gamers?

My viewers watch my gameplay videos for three main reasons:
1. To hear my commentary/review.
2. To learn about the game and how to play certain parts.
3. To see how I handle and react to certain parts of the game.

Since I started my gaming channel, I’ve played a lot of games. I love Nintendo, so I’ve included their games in my line-up. But until their claims are straightened out, I won’t be playing their games. I won’t because it jeopardizes my channel’s copyright standing and the livelihood of all LPers.

Above: Youtuber Zack Scott is one of the people affected by this decision by Nintendo.

Or in other words, he’s annoyed enough about the situation that he won’t be playing any more Nintendo games on his Youtube channel or anything. Yeah, nice going there Nintendo, missing out on free advertising from a channel with about 200 000 subscribers…

Personally, I think the idea is kind of ridiculous.  I mean come on, it’s free advertising here!  How many people have watched these videos and wanted the games featured more because of it?  I know I have, watching people’s Luigi’s Mansion 2 footage and the various trailers online is one of the things that made me want the game the minute it was released over here.

And while technically you could say a video walkthrough or LP is a derivative work, I do feel the creators do deserve compensation for their efforts.  It’s not cheap buying all the equipment needed to record said games (just look up how much the likes of a 3DS capture card is for example), it requires quite a bit of effort to talk about a game in an entertaining way and there’s a certain level of committment that’s even required just to create a walkthrough.  Surely that’s worthy of letting them make some money off their work, right?

Above: A 3DS Capture Card costs more than 400 dollars.  People need that monetisation to make back some of that money.

Interestingly, this situation isn’t actually too dissimilar to something Microsoft did a few years back.  They stopped people on Youtube monetising footage of their games too.  Read this article for more…

Yet with that said, didn’t Nintendo read what people online said about Microsoft’s decision?  Because I’ll say it right now, it went down terribly.  There was significant backlash the company because of it, people stopped making videos of some of their games in protest and whole articles were  posted on certain sites about why this decision was a terrible idea.  Maybe they should have learnt from history here?

It also makes me wonder whether this only works with ‘official’ games.  Does a fan game or ROM hack playthrough come under the same content ID/no monetisation rules as games Nintendo actually sells in shops?  Because I’m pretty sure people will get annoyed if this hits people like raocow, ProtonJon or AzureBlade49 as well… 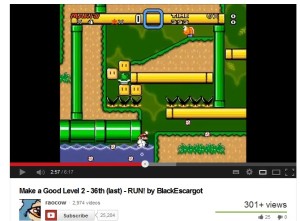 Above: Where do ROM hacks and fan games like those played by raocow come under this rule?

On the bright side, they have specifically said they won’t shut down fan videos altogether, which is probably at least something positive:

We continually want our fans to enjoy sharing Nintendo content on YouTube, and that is why, unlike other entertainment companies, we have chosen not to block people using our intellectual property

But it’s still not a great idea to stop people on Youtube monetising their LP/gameplay walkthrough videos or reviews.  After all, some of these people kind of make their living off the site, and doing this really discourages some of the more famous Youtube users even playing Nintendo games.

What do you think of Nintendo’s decision to claim ad revenue on all videos using content from Nintendo games?  Has it affected your Youtube channel?

It’s fair, completely fair.
They’re using Nintendo’s content, it’s what companies do. You think some famous company could just drop Mario in the middle of their movie without permission? No, Nintendo would sue.

What about the people with no interest in buying the game? They just watch the playthrough so they don’t have to buy it. Nintendo is losing sales in that.

I agree with Michael on this matter: these YouTubers wouldn’t be able to make their videos without using Nintendo’s creations. And there are certain groups (such as Machinima) that have alliances with Nintendo, having procured permission from them. This allows all parties involved to profit. These LPers (in my eyes) are complaining because they are unmotivated layabouts who can’t be bothered to put in an honest day’s worth of work. You might disagree with Nintendo, but at least they are working. The YouTubers are hardly what I call hardworking individuals. And like I said earlier, it’s not as if they… Read more »

To anyone claiming Nintendo is not in the wrong, I think you should keep this in mind: 1. It’s fairly likely LPs are fair use, see here: http://gamasutra.com/blogs/EZacharyKnight/20130516/192394/Whats_All_This_About_Lets_Play_Videos.php 2. You should read both sides of the argument here, which is an actual legal perspective on things: http://www.gamasutra.com/blogs/GregLastowka/20130517/192424/All_Your_Nintendo_Lets_Plays_Are_Belong_To_Nintendo.php#comments Also, this site doesn’t officially get support from Nintendo or partner with them (sort of, they’ve sometimes sent things for us to talk about), but I still make some money from it. Makes me glad I don’t use Youtube monetisation and keep most things on my own hosting. Means I don’t have to… Read more »