With Mario & Sonic being such a success, lots of people have wondered whether a proper crossover game starring the duo could work out. As in, a 2D or 3D platformer which mixes both franchises and their gameplay styles.

And well, there’s been a lot of disagreement here. Some people say they could work, and point to games like Mushroom Kingdom Fusion as proof. Some say they couldn’t, with the gameplay styles just being too different. And I’ve even seen a few folks claim it’d only work in 2D. As if 2D Mario and 2D Sonic were compatible, but 3D Mario and 3D Sonic work.

But let’s look at it rationally; could a Mario & Sonic action game really work?

On a story level, there aren’t many reasons it wouldn’t. Remember, Bowser and Eggman have always teamed up in the Mario & Sonic titles. And strangely enough, they’ve mostly got on pretty well. I mean sure, that might not last out for forty hours or so, but damn, they’ve been aggressive to each other than Bowser and his paper counterpart. And stabbed each other in the back less than Bowser did to Antasma. 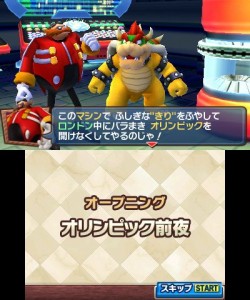 Add Mario and Sonic (who seem to be on better terms on a personal level than their companies were in the 16 bit era), and a simple ‘heroes vs villains’ setup would work fine for a crossover like this. Heck, the two bad guys even both like running their own theme parks!

But could it work gameplay wise?. Because as some people have pointed out, the gameplay in the Mario series and Sonic series is… fairly different. Mario’s gameplay is slower paced and focused more on careful platforming and exploration, Sonic’s is about high speed and platforming requiring good reflexes.

As a result, a few people videos have said merging the gameplay styles couldn’t work that well.

But I think this isn’t the case. Instead, I think there are plenty of ways the two types of gameplay could be merged into a cohesive whole.
Such as, having split paths for the two characters.

I mean, isn’t that how Sonic & Knuckles worked? You had two characters with different skillsets and each level had different paths they could take?

Because that could work well for a Mario & Sonic platformer too. One path would be a speed focused one for Sonic (involving level design a bit more similar to Sonic Generations or Sonic Colours). One would be a more slow paced, exploration based path for Mario to walk through the level. That way, Mario wouldn’t have to run at lightning speed, nor would Sonic have to slow down and takes things easy.

It’d also work well with the 3D Mario Galaxy type game design. Why? Because the two paths could have separate missions with their own ‘Stars’ to collect. Maybe Bowser and Eggman both have troops in the levels, and decided to split up and cover the different possible areas.

Heck, perhaps side characters from each world could also take on levels based on the other franchise. I mean sure, Mario doesn’t like running super fast and Sonic doesn’t care to slow down and explore…

But who says Tails or Knuckles might not appreciate some Mario style platforming? After all, their levels in Sonic Adventure were slower paced affairs to match their skillsets. And on the same note, maybe Yoshi and say, Nabbit or Wario might like to try out a fast paced Sonic style stage or two. I mean, Wario Land Shake It had levels where Wario had to basically charge through at top speed, all while smashing everything in his path. And Yoshi did that super speed stuff in the Hightail Falls Galaxy in Super Mario Galaxy 2. So perhaps each path could be played by both two or three Mario characters and two or three Sonic characters respectively.

There’s also obviously the ‘different types of levels in sequence’ idea. You’d just have say, a Mario level here, a Sonic level here and some cross between the two here. In the Mario stages, Sonic would be a bit slower. In the Sonic stages, Mario would be a bit faster. It’d certainly throw off the fans a bit, but that could work out well in the end.

And then there’s a third possibility.

What if the game simply doesn’t try to crossover the gameplay styles?

I mean, have you heard of Crash Bandicoot Purple: Ripto’s Rampage? Or Spyro Orange: The Cortex Conspiracy? No?

Well they were two games meant to cross over the Crash Bandicoot and Spyro the Dragon franchises respectively.

But unlike most crossovers, they didn’t mix the gameplay. Instead, each game was a traditional Crash Bandicoot or Spyro title, except the characters from the other series were involved as well. So Crash Bandicoot Purple had him and Spyro fight Cortex and Ripto in Crash Bandicoot style 2D platforming. And Spyro Orange had him and Crash team up to fight Ripto and Cortex in a Spyro style isometric platformer.

So perhaps that could work for Mario and Sonic too. Two different games, one fairly similar plot between them.

They could also try and simply stick the two in the same levels, Mushroom Kingdom Fusion style. Like this:

Yeah, it wouldn’t work as well as a hybrid style or specially designed levels, but I’m sure Nintendo could get it work well enough. Does anyone think Sonic plays horribly in Super Smash Bros? Yeah, I thought not. So something like the Subspace Emissary or Smash Run could be a possibility here. A mechanically complex, somewhat awkward one, but a workable possibility none the less.

Outside of the level design and basic mechanics, a lot of things seem like they’d be pretty easy to integrate. The enemies for example seem just as weak to Mario’s jump as they do Sonic’s spindash, so there aren’t really too much issues on that front. Power ups could mostly be interchangeable, since each universe has a few that act a little like those from the other series (the star/invincibility power up being good examples). And for bosses… well, both Bowser and Eggman have used mechs before. So it seems likely they’d use them in this game too.

Which all leaves on last question. Namely:

Who would develop the game?

Because at their best, both Nintendo and Sonic Team have made some really amazing titles in the past. Oh sure, the latter has been a bit less consistent then the former, but they’ve both got the potential to make something great here.

Either of them could make this.

But what if neither did? Yeah, that sounds crazy, doesn’t it? But imagine if one of the teams who worked on the Super Smash Bros games did instead?

It’s an odd choice, sure. But think about it for a second. These teams have worked with both Mario and Sonic, and have genuine experience in making an engine where both are viable. Additionally, they’ve also got people with experience at making both fast and slow paced action games. Like say, series director Masahiro Sakurai and his work on both Kirby and Kid Icarus Uprising.

So I think one of those groups could be the best choice for such a title. They’re not the ‘official’ teams for the two series, but they have more experience with other gameplay styles than those guys ever did.

And now, for the moment of true.

Could a Mario and Sonic crossover action game work?

I think it could, with the right team and the right mix of gameplay styles. It’d be difficult to get right, but such a game could be amazing if it was done well. It’s definitely possible, and its an idea that Nintendo and Sega should 100% look into in the future.