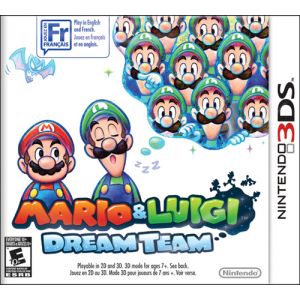 Mario & Luigi Dream Team already has one of the best soundtracks of any 3DS game ever made.  But while the original music is absolutely fantastic on its own, I’ve also come across many equally brilliant remixes of said tunes on Youtube, which I think just about everyone could enjoy.  So here they are.  Here are ten fantastic remixes of Mario & Luigi Dream Team songs that I found while searching Youtube!

One of my favourite remixes of the boss theme ever made, this remix is made by Davichii64, a fairly well known Youtuber whose made a whole ton of awesome video game remixes.

The same guy also composed probably the most frantic remix of Paranormal Chaos from Luigi’s Mansion Dark Moon that I’ve ever heard.  Good if you want a song for a mental breakdown (or if you want to know what that song playing in the last question of my Ghoul Meda Quiz happens to be).

Feels more… light hearted than the version by Davichii64, but it’s another remix of the Never Let Up theme that I actually find pretty catchy to listen to.

Also known as what Never Let Up would sound like as a non sampled Super Mario World music port.  It’s definitely low tech in every sense of the word, but damn it makes me despair that no one’s ported this song over to Super Mario World yet…

A surprisingly good remix of the song, simply because of how different it is from the other four million remixes of it.  Indeed, parts seem like they’ve been redone so well they’re barely recognisable as part of the original theme.

The first ever remix of Mario & Luigi Dream Team’s boss song, I used to really like this version.  Unfortunately, it seems like the remixer just went a tad overboard with the instruments and overall ‘loudness’, so it’s never been quite as great to me as some of the other versions out there.

Probably the only remix of Antasma’s theme ever made, King of Nightmares is a fairly catchy remix that manages to possibly equal the original song in epicness.  Bit repetitive though, especially for the five whole minutes the video lasts.

Another ‘what would Mario & Luigi Dream Team sound like on the SNES’ remix.

Oh hey, it’s a version of the boss theme that would work surprisingly well in a final dungeon or boss battle!  Yep, sounds almost like Ganon’s come to Pi’illo Island!

10. Nightmares in Time; Giant Luigi vs Time Eater Mash Up

Want to know what it’d sound like if you put the Giant Battle theme and the Time Eater battle theme (from Sonic Generations) at the same time?  Surprisingly awesome, as this neat remix/mashup shows.

But what do you think of these remixes?  Sure, they’re pretty much all remixes of the Never Let Up theme from the game (because everyone really seems to love remixing the boss theme for whatever reason), but they’re certainly different enough to be worth listening to.