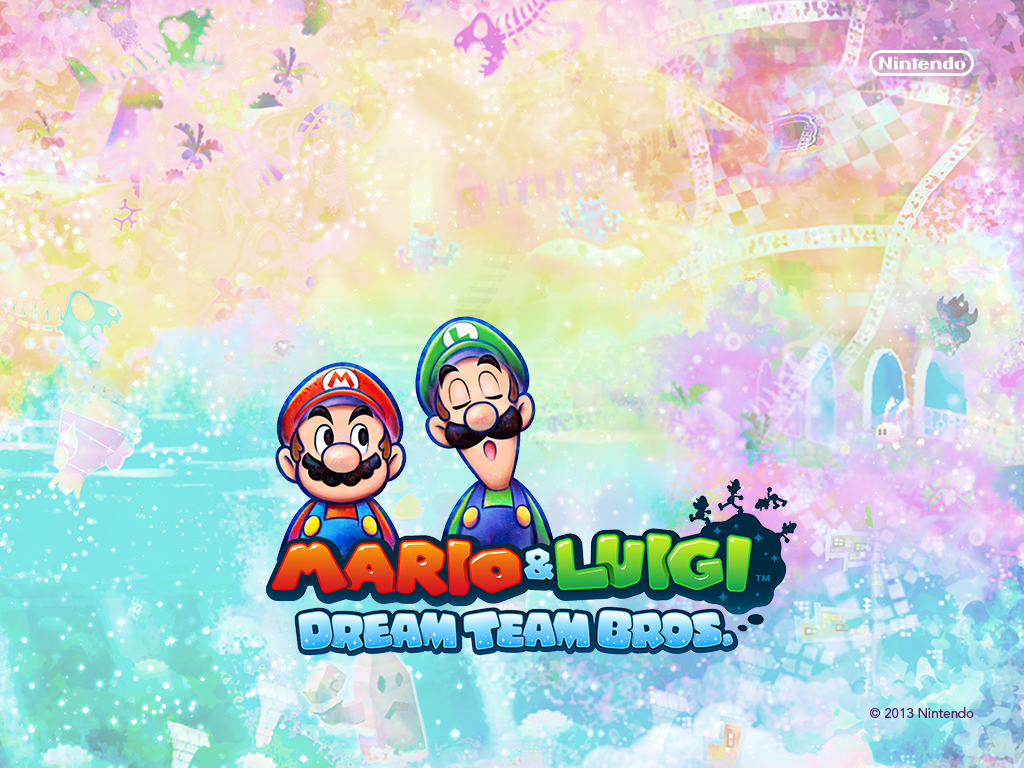 As you may have guessed, I haven’t really been online in the last week or so because of Mario & Luigi Dream Team being released in Europe and me playing through it for the first time.  But now I’m only about two battles away from the final boss (currently fighting a battle against a giant version of Bowser in the dream world as giant Luigi), I thought it’d be the best time to talk about how the game is like so far.

Yes there will be some spoilers, because I’m about 36 hours into the game now due to various sidequests and the main storyline.  But let’s begin!

First of all, I may as well mention that this game is really, really nice on an aesthetic and technical level.  The graphics look amazing (the mystical dream like forest where you go after making the Ulti Bed late in the game is a definite standout), and the music is even better.  Seriously, I don’t recall a single theme from this game that ISN’T catchy in some way.  Here’s a nice sample to show you what I mean:

That’s just the theme for the ‘hub’ like main area of the game, the one you start out in shortly after landing on the island.  It’s even got the sounds of crowd cheers and things incorporated into it.

As far as battle mechanics go, this game is really damn neat.  Seriously, think that 3D thing is for ‘show’?  Nope.  You’ve got items that has you charge from the foreground into the background (the Luginary Ball dream attack and that copter thing for instance), enemies that taunt you in the background that have to be lured out by throwing Taunt Balls at them and even bosses that chase you into the foreground (most notably an annoying stone bird boss that blasts Mario and co with an array of missiles mid chase before charging at one of ’em to take them down).  Another really ‘cool’ (read somewhat annoying) boss battle is with Kamek late in the game.  He splits into four, then the four Kameks all use a different attack that makes use of the console’s tech.  Red Kamek summons a giant broom that tries to sweep Mario off the stage, Blue Kamek chases him through a Thwomp filled hallway while shooting magic and the other two use magic blasts.  There’s also an instance where you have to use the enemies you kill in a counter attack to knock Kamek down in the background.  Clever stuff.

The giant battles also return, with Dreamy Luigi acting as the equivalent to Bowser from the last game.  But while the ‘drill’ battle shown in the trailer is neat enough…

That is NOTHING compared to the later battles… Oh no.  The next few are absolute and utterly nuts in both their technical complexity and plain weirdness.  Like the weird house mecha you fight in dream Wakeport, that turns into a giant flying hammer at one point (and which comes out of absolutely NOWHERE at the end of a random section).  Or the later fight with a bird god creature (no name given to avoid too many spoilers).  Think you’ve seen crazy giant sections?  Just wait until you see a giant Luigi charging through a forest after an enormous bird and trying to pull it down to the ground.  Or him flying after it into a portal in the sky and dodging laser blasts in zero gravity.  Seriously, this fight just has to be seen to be believed.  As does the one after it…

Add in some crazy Bros attacks in both the real and dream worlds (a giant mallet made of Luigis?  A Luigi tornado you can aim at enemies?), and you’ve got one hell of an interesting and dynamic RPG battle system here.  I mean, after playing any battle here, normal JRPG battles would seem plain DULL by comparison.

So the battles are fun and it looks nice.  But how’s the rest of the game you may ask?

Excellent.  The overworld is a big improvement from Bowser’s Inside Story (and especially) Partners in Time, with interesting places connected by logical paths and a fair few secrets and sidequests to find.  The moves you use to navigate the overworld are pretty much the same wacky things used in earlier RPGs, and the dream world is arguably even better, with bizarre mixes of characters from the real world and abilities that have Mario riding a ball made of Luigis, having Luigi as a sun that turns the temperate up or down and even doing things like switching gravity or speeding up/slowing down time!

However, it’s not all 100% perfect.  For one thing, some of the dream world areas do drag on a little too long, with many being almost like huge mazes filled with areas and puzzles.  Okay, they do look and sound great and the abilities you get are fun to use… but sometimes it feels like the game puts these bits in at almost random places to  try and extend the game (mostly notably in a certain dream world in Wakeport).

The difficulty has also been increased a bit… which may or may not be a good thing (depending on your skill).  Enemies and bosses seem to have about five or ten times the health they did in prior titles, enemy and boss attacks are sometimes very, very difficult to master/dodge.  No really, the Goomba equivalent seems to have about fifty health this time around, and the early bosses alone contend with the later ones in Partners in Time and Inside Story for both amount of health and general difficulty to take down.  It’s definitely fun as a result, but I suspect some unlucky souls will have a HUGE amount of difficulty with this title.  Don’t expect level grinding to save you either, the battles require significant skill in action gameplay to win.  Oh, and if you’re having trouble with the Giant Luigi battles… you’re basically screwed.  Those hint/easy mode features?  Don’t exist for them.  Hope you like the touch screen/gyroscope!

Finally, I’m pretty sure some Mario RPG fans are wondering about the characters and sense of humour.  Well, you’ll be happy to know it’s all still there and present.  The characters are unique and have personalities (aka not like the ones in Sticker Star), characters return from the earlier games (Popple, Broque Monsieur, Kylie Koopa and various others are included here) and basically, the whole thing as a sort of lazy going, somewhat sarcastic sense of humour to it.  You’ve got humorous nods to RPG clichés, two muscular tour guides who use the word ‘beef’ in about two hundred questionable ways and enough dangerous misunderstandings between characters that you could basically make a drinking game out of it.  Really, if there’s even the slightest possible chance that someone will either act like a jerkass or challenge you to a boss battle… then you can pretty much guess what’s coming.  So Dream Team is as amusing as ever.

Well, those are my thoughts on the game so far.  I’m nowhere near done with it in all technicality (there’s a ton of sidequests, a battle arena/gauntlet mode and much more to come), but it’s looking like a great new Mario & Luigi game so far.  Definitely buy it when it’s released in your country.

The game looks really fun. Would you recommend it even though I have not played any of the other Mario and Luigi games? I’ve asked this same question on other sites but no one has bothered to answer me.

It’s definitely worth getting if only because the battle system is freaking awesome. Seriously, this is the most dynamic turn based RPG I’ve ever seen battle wise, with some of the most brutal, hardcore bosses in gaming.

Definitely worth buying, even if you didn’t play the other games. Just keep in mind that this is way, way more difficult than Bowser’s Inside Story.

Thanks a lot. I haven’t played Bowser’s Inside Story, I kind of forgot about it. I really want to try this game because of how silly it looks.