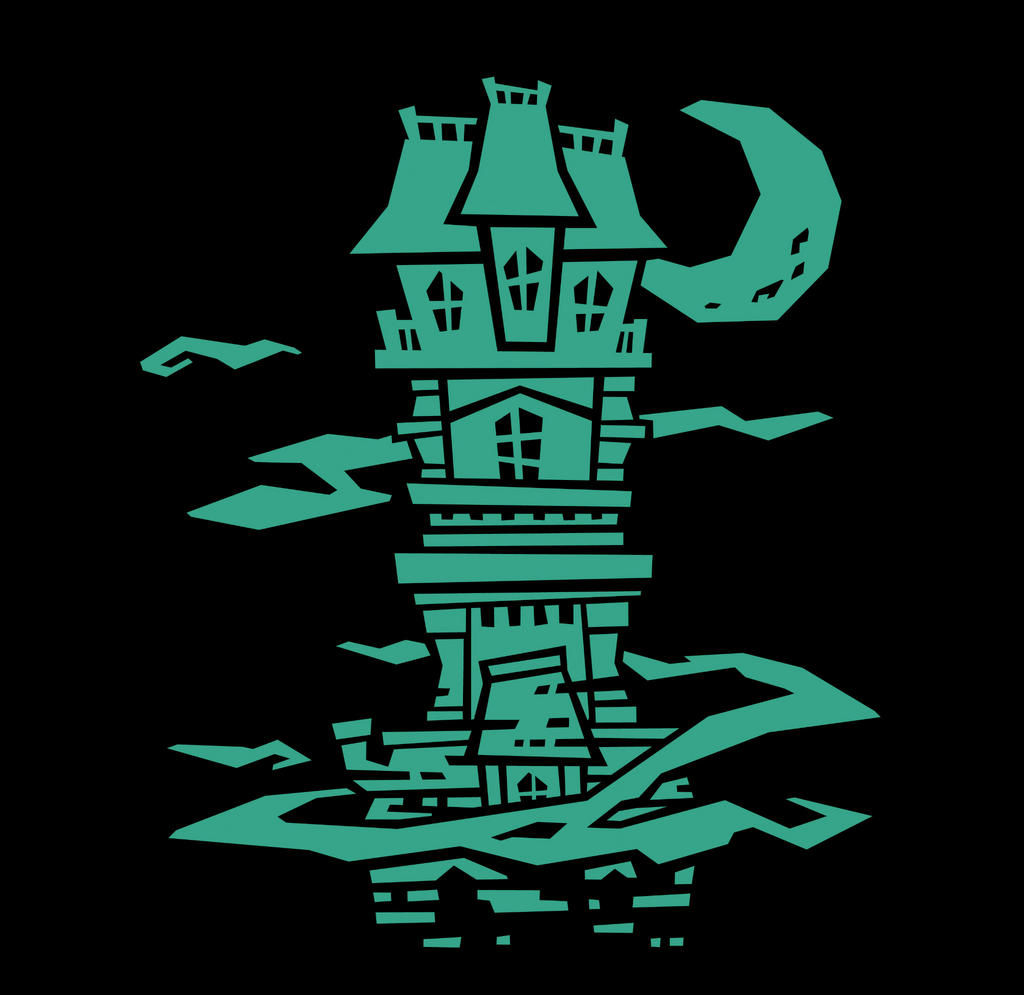 As those who’ve attempted to play through the ScareScraper in Luigi’s Mansion Dark Moon may have realised, it’s not easy.  The ghosts come in groups capable of killing Luigi in minutes, the traps come out nowhere and can turn your game into an absolute nightmare and generally, it’s a pain in the proverbial.  So to stop you getting too stuck, here are some tips from an expert ScareScraper player, someone’s who beat 25 floors of Hunter Mode expert on their own. Yes, here are my five top ScareScraper Tips for beating expert mode.

5. Don’t stay in one place during battles

It may seem counter intuitive considering how much ghost busting feels like fishing, but staying still and trying to back yourself into a corner is a nice guaranteed way to end up dead in about twenty seconds.

Indeed, even in the original game it was apparently a bad idea, watch the expert tool assisted runs and they actually sort of follow the portrait ghosts they’re catching instead.

But back to Dark Moon, you need to always keep moving when fighting ghosts.  Fighting a Gobber boss? Continuously walk around the boss at a distance while constantly using the Poltergust, making sure to move out the way when you see it launch that strange goop in your general direction.

Fighting a Greenie, Sneaker or even Slammer boss?  Don’t try and fight them in one place.  The first two have enough backup that doing so will cause you to drop your guard extremely quickly and waste a ton of time, the latter spawns enough beetles that standing still will eventually break your Poltergust suction via ambient enemy damage.

So instead of being a sitting duck for every attack flying in your general direction (like a lot of people who try and play this game), let the boss slowly pull you around a bit and use that to get out of tricky situations.  Now, you do have to make sure you’re always pulling back on the circle pad at least slightly here, otherwise you’ll eventually take damage from being dragged and lose control, but what you ideally want to do is the following:

1. Let Luigi get pulled around a bit by a boss until you get to part of the room with few enemies by pulling the circle pad back only in the slightest way possible.

2. Then, charge up the A Pull meter to blast the boss with as much lightning as you can before the other enemies/second boss in the room closes in on you. When that happens (like when you see a Sneaker boss slowly materialise right behind Luigi), let yourself be dragged to a different part of the room to avoid its attack and repeat.

It’s kind of difficult to explain, but with tactics like this I have managed to capture a Greenie boss in under a minute with no help from other players and with no health lost.  You can also use the Gobber strategy to turn Gobbers from the most annoying foe in the game to something that ends up as a complete joke everytime it appears.

4. Use Your Dark Light to lower ghost guards

It’s a very simple technique, but I’m surprised how many people who play Luigi’s Mansion 2 don’t know it.

Basically, if you see a ghost (like a Greenie) with either a shield or weapon, shine the Dark Light on them to make them lower the shield and weapon and let you blast them with the Strobulb to stun them.

It’s a great way to deal with those rooms with six Greenies in hockey gear, just run away from them while using the Dark Light to make them lower their weapons, then blast them in a group to make a good two or three of them permanently drop their gear for good.

It’s much easier and quicker than dodging their attacks, and it works wonders in the tougher rooms on higher floors of the tower.

P.S. If they raise their item back up again after you do this, hit ’em with a Strobulb flash to reset the timer and let you use the Dark Light on them again. You can use this to group multiple ghosts together and stop others from escaping after you turn them defenceless.

3. Take Advantage of the item generosity on boss floors

Every five floors in the ScareScraper, you fight a boss on a specially generated floor. Only four rooms, no other enemies except those spawned in the boss fight and no puzzles or locked doors at all, these are all about defeating the boss and moving on.

But wait!  Before you go charging around trying to unveil the boss, use the opportunity to heal up a bit!  Yes, these boss floors are absolutely PACKED with healing items.  Nearly every painting on the floor gives you a watermelon or pumpkin that can be broken for extra health, hearts can be found in most decorative furniture and there is always enough to get all players to full health before the fight. * 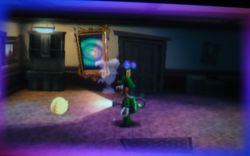 Above: Boss floors are packed with useful healing items.

So don’t just charge in at 20 health and get your ass kicked by a boss ghost, seek out some health first and go into that battle arena ready for anything. It really does make a difference.

* In the fight with the Brain on the final floor, all treasure chests that don’t have the boss inside WILL have a healing item.  Take advantage of that.

Traps in the ScareScraper suck.  You’ve got those rugs that pull you into them and stop you from moving until a team mate frees you, curses that reverse your directions and vases that get stuck on your head.

The last ones though are the real killer.  Making you completely defenceless until you remove the vase and unable to leave the current room in any way whatsoever, you really need a good method to detect them in advance. 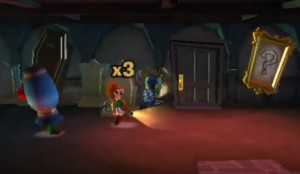 Above; See that guy with the vase on his head?  Didn’t follow my advice.  From this Youtube video.

So here’s that very method.  Whenever you see a blue vase, use the Poltergust on it.  If it shakes, it’s real.  If it doesn’t shake, it’s a trap.

Simplest thing ever, saves a lot of headaches.

P.S. If you do get a vase on your head though, you can apparently walk into an attacking suit of armour to get the vase smashed and free yourself.  This will obviously do damage (and 20 damage at that), but it’s better than being stuck in the same room while ghosts spawn from nowhere to kill you.

1. Exploit Gobber and Brain Boss AI to stop them attacking

Finally, here’s an interesting way to completely destroy the difficulty of two of the most annoying bosses in the ScareScraper.

Normally, Gobber bosses spit gunk and Creepers, the Brain throws books and generates ghosts and the battles are a bit annoying.  But do you want to know a clever way to completely remove the difficulty here? 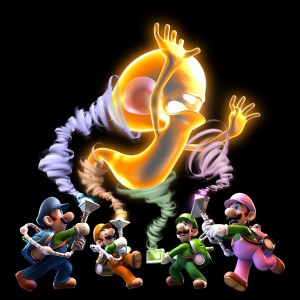 Above: The Brain is usually annoying to fight.  This tip can make him easier.

Vacuum the boss until he starts to jump up/start a shockwave attack, then hit him with a first level lightning/electric attack before he does anything.  He’ll then try and use the jump/shockwave attack, so repeat the process.

The boss will then never do a single attack other than this one until either you let go off him or he dies.  No books, no movement, no goop, no Creeper launching, he just does the same attack until either you mess up or he kicks the bucket again. I don’t even think the game generates ENEMIES when you do this, so you can pretty much do the same thing at your leisure until you win with ease.

Above: Gobber ghosts like the Spectral Sloth above don’t attack if you do this.

Even better if you’ve got a friend or two helping you out, alternate your attacks and have anyone remaining clear up any ghosts left over from earlier parts of the battle.  I guarantee you that you can pretty much bring the boss down in under a minute if you pull this off.

So there you have it, five very useful tips that should help Luigi’s Mansion 2 players get through the ScareScraper/Thrill Tower with minimal issues.  Hope you found them helpful, and perhaps in future I’ll see you playing the game online at some time!