Officially, Luigi’s Mansion Dark Moon has a more light hearted, comic tone than its predecessor.  It’s got ghosts with funny personalities and behaviour, a lack of human like enemies and a general tone which is slightly less somber than the original.  But even with this change in atmosphere and tone, the game still has its scary/creepy moments!  So here are five of the creepiest things about Luigi’s Mansion Dark Moon…

6. The Knights are Gone!

Here’s a creepy, minor thing you may not have noticed about Treacherous Mansion.  In the first mission, you explore some creepy catacombs and have to battle some ‘knights’ in the Ceremonial Chamber.  Along the way you see plenty of suits of armour standing and sitting around in all kinds of odd positions and doing strange things (like playing chess in one of the jail cells).

But now try returning to this area in Terrifying Invasion (the secret mission).  A ton of knights have mysteriously vanished!

Not all of them mind, just a couple.  But what’s interesting is that all that’s left is a creepy black stain on the floor like the results of spontaneous human combustion.  And what’s more, these weren’t ‘enemy’ knights either, these were the completely static ones like the one playing chess/checkers in the jail cell or the one lying under the spider web before the Ceremonial Chamber!  Something must have moved them… 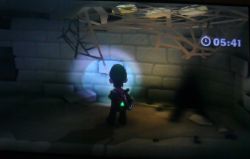 Above: What happened to this guy?  All that’s left is a black mark in the shape of a knight…

Now what boss uses suits of armour as hosts?  Oh yes, the Tough Possessor you fight in ‘Stop the Knightmare’.  And isn’t it a little coincidental than it just happens that about the same amount of suits of armour are used in the boss fight?

I guess the boss took his ‘hosts’ for his boss battle from the Treacherous Mansion basement/cellar. Or perhaps something even darker happened?

Yeah, you know this place.  The one with the rotating doll and the weird jack in the box things.  But to be honest, this has to be one of the creepiest rooms in the game in general.

For one thing, who the hell thought that doll that moves its head round 360 degrees was a good idea?  If we’re assuming the mansion belonged to the 3 Sisters, then it means one of them had some damn creepy ideas about what kind of toys were suitable for kids.

Above: Dolls that rotate their heads 360 degrees and follow your movement!  Definitely a good kids toy!

But that’s not all.  How about those jack in the boxes found lying around?  Not only do they play a creepy version of the ‘piano’ theme when interacted with (that sounds like some horror villain playing it on a broken music box), but that laughter when the jack in the box pops up could seriously freak someone out. Just listen to it, it sounds freaking demonic!

Above: I think Mad Jack from Donkey Kong 64 has competition in the ‘evil laughs’ category

Finally, there’s the whole ‘doll house inception’ thing.  You know, where you look inside a dolls house and end up seeing the room you’re in complete with Luigi looking into the dolls house window.  How the hell is that possible?  Is the whole room some sort of illusion that’s never explained?

All in all, it’s one creepy location, and definitely provides some of the scariest parts of Luigi’s Mansion Dark Moon.

Both of them.  One in E-2 Double Trouble and one in E-3 Train to Catch.  For the former, you’ve got King Boo literally appearing and disappearing without a trace behind Luigi in the most menacing pose possible, to the point Luigi shivers in fear without even seeing him.

Above: Luigi is completely unaware of the horrifying sight found just behind him…

And in the latter, King Boo somehow manages the impossible and manages to scare you in pre recorded video footage!  That very moment when you zoom in on him and he manages to quickly change direction and glare into the camera has got to be one of the most unexpected and somewhat creepiest moments in a Nintendo game.  Guess that fourth wall really won’t protect you here…

Above: How does he do this in a pre recorded video?

They’re not much, but damn they beat the whole ‘hanging Luigi’ thing from the original in the potential scare factor.  And they’re actually intentional!

Here’s an interesting little background detail you may not have noticed.  Back in mission B-3 ‘Graveyard Shift’, you end up bringing the rescued Toad down into a laboratory to warp him back to E Gadd’s bunker.  But in this same run down lab, you know what else you see?

A carnivorous plant and a red flower that tries to slam down into you as an attack.  Both enemies found in Haunted Towers.  The venus fly trap like thing even breaks out the test tube when you’re in the room! 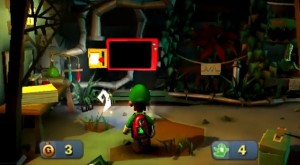 Above: What are these plants doing here?  Are they genetic experiments?

Come back later though… and they’re gone.  And just coincidentally, so are the two plants being grown in the Plant Nursery.  And even more coincidentally?  The mansion has now been taken over by man eating plants and dangerous ceiling hanging flowers! 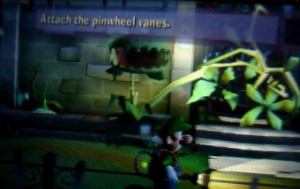 Above: Like that one, now right outside the front gate!

So I guess these potentially genetically modified monsters escaped their holding ‘cells’ and have run havoc over Haunted Towers.  Worse yet, the man eating plants later appear in Treacherous Mansion with what seems like no real explanation whatsoever… including one in the Kitchen. 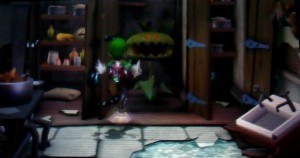 Above: What is that thing doing in the kitchen?

Anyone want to bet King Boo brought these creatures out the mansion and to his hideout?  And by doing that, he’s pretty much sent an non native invasive species into Evershade Valley and the Mushroom Kingdom, potentially dooming a significant amount of people and causing absolute chaos.  Nice work for completely screwing up the ecosystem in a Luigi’s Mansion game villain!

2. The Clockworks’ Dark Past

It was mentioned on the official site a while ago, and damn it gives a pretty good reason for why this place is so haunted.  Here its description:

This factory once produced the world’s finest clocks and time-measurement devices. Your watch probably comes from here, and you don’t even know it!

E Gadd apparently also says it was closed down to accidents too, like coats and other objects getting caught in the machinery while it was still active and working.  Possibly something to do with the ghost activity in the area.  It’s quite the disturbing thought, even if I can’t currently track down the original source.

The place also has all the telltale hallmarks of somewhere where something has gone horribly wrong.  You’ve got coats, toolboxes, personal items and various other things left inside without no one coming to collect them.  You’ve got an ominous ancient tomb underneath the building like something from a horror movie (aka the ‘ancient burial ground’ thing that so many haunted mansions seem to be built on).  It’s even implied a certain few of the population may well have perished or been killed by the machinery or some kind of industrial accident gone wrong.  It’s like the place was evacuated only recently.

And the Japanese name doesn’t help things either.  Know what that name is?

Or in translation, Hell Clock Factory.

Now that’s an uninviting name if I ever saw one!  Almost as bad as the Secret Mine’s Japanese name, hyakkiya kodo.  Or according to Mario Wiki, Hundred Demon Night Tunnel.  Yes, the Japanese names for levels make it fairly clear that few have ever entered and lived to tell the tale.

Indeed, this whole backstory thing is one reason the game is arguably much creepier than the original in retrospect.  I mean sure, some ghosts back then had a background and an unnerving backstory, but the mansion itself was nothing but a ghostly fabrication.  There was nothing explicitly creepy about the location other than looks, it was all basically made in one night with Boo black magic and vanished again the following one (to later appear in Mario sports games and as a go kart track for eternity).  The Dark Moon ones on the other hand were actually lived in.  People or other creatures actually died in the walls of these places via various circumstances.  As a result, they’re arguably scarier to navigate than the original game’s house ever was.

Finally, let’s look at something only a few people have seemingly considered, the Dark Moon itself.  This supposedly keeps ghosts friendly, and King Boo breaking it was enough to turn all ghosts in Evershade Valley hostile and kick off the plot.

But how does it work?  And more interestingly, what happened prior to the Dark Moon?  How did the ghosts and Dark Moon come about exactly?

If the moon wasn’t around before, how did the ghosts act without it?  Are they ‘naturally’ chaotic, or ‘naturally’ good in some sense?  Did merely being near a being with powerful magical powers (think like King Boo or Bowser level here) bind the valley’s ghosts to said being’s will?

And even with all this, isn’t the plot of Luigi’s Mansion 2 basically a battle between ‘good’ and ‘evil’ over who can control the valley’s ghosts?  You’ve got Luigi and E Gadd trying to reassemble an object that controls and keeps them in check and King Boo basically trying to mind control them by almost replacing said object.  How does this whole Dark Moon thing even work?

Are you even heroic? Or are you basically doing the same to the ghosts as King Boo is to them?

So those are six of the creepiest and most mysterious things about Luigi’s Mansion 2.  But because I’m bored, here’s a bonus one to potentially creep out the unwary…

Bonus. The Lightning Reveals All

In the third mission of Gloomy Manor, all the suits of armour in the Guarded Corridor have turned invisible by Spirit Balls for some reason.  But did you know there’s also quite an unnerving thing that happens in this room every now and then?

Yes, wait for the lightning to strike and you see all the invisible suits of armour turn visible for a split second!  It’s a bit like in all of those horror movies when you see a terrifying monster or serial killer revealed in the windows or mirror reflection by the lightning, and it’s actually quite an effective scare in this otherwise empty room.  Here’s a clip showing the effect:

It’s not exactly terrifying by any means, but it’s certainly an effective bit of atmosphere in this game.  It’s almost a pity so few other rooms make use it to reveal Dark Light hidden objects…

Well, those are my picks for six of the creepiest things in Luigi’s Mansion 2.  It certainly is a darker game than the cartoony designs and exterior would make it out to be, isn’t it?

Either way, do you agree with this list?  Or are there various other things I should have included but not listed for whatever reason?

I thought that the clockworks were very disturbing. It’s also weird because if you look at the history of nintendos pokemon games, it is disturbing too… Very weird.

About the knights, can’t you just use the dark light? And it’s not scary at all.

Hey she thought it was so let it be

Also if your in haunted clockworks pull down the chain then look out the window…..did you see it? SOMETHING RUNS BY THE WINDOW OUTSIDE….WICKED RIGHT?!