As anyone who’s played the game for more than five minutes should be able to tell you, Luigi’s Mansion 2 is just packed to the rafters with detail and minor things hidden away in the mansions.  But did you notice some of the more subtle stuff?  Like the working clock you can find in game or the tiny bits of foreshadowing the game does when you look through certain windows?  Perhaps not.

A rather nifty yet creepy touch, another thing you may not have noticed in this game was how the suits of armour in Gloomy Manor actually turned their heads to face Luigi regardless of his location the room.  Seriously, try it sometime.  If you run back and forth in front of them you can see them make very subtle head movements to track Luigi’s movement.

Kind of like those paintings whose eyes seem to watch you at all times in horror movies.  It’s made a bit weirder here by how these suits of armour aren’t even animated by a ghost; you can actually examine one to knock its helmet off yet find nothing is underneath.

So yes, a nice little minor touch to look for when you re enter the Entrance in Gloomy Manor in future.

Perhaps not so much an intentional thing as much as a mistake by the developers and the result of you going out your way, but it’s an interesting one regardless.

In B-3 Graveyard Shift, ignore the Pinwheel Gate and Hollow Tree altogether and head to the Gardener’s Dwelling.  Here, pull off the poster to reveal a Balloon Berry, grab it and float down to the Gardener’s Lab, then head left to the Pixelator.  Press X to examine it.

You get Luigi saying for Toad to come here.

Luigi hasn’t even found Toad yet.  Hell, he doesn’t even know Toad is IN this mansion somewhere or that he’s not just heading up the Hollow Tree to fight a boss.  Ah well, guess Nintendo accidentally ‘spoiled’ their own level by not bothering to change the error reaction when you do something meant for the Toad escort mission section later in the level.

In Treacherous Mansion, there’s this hidden chain you can make appear by shining the Dark Light near one of the gargoyles in the Front Entrance.  Everyone knows that by now, right?  It’s needed to get one of the gems.

But did you know that the game actually kind of points it out to you earlier than you expect?  Seriously, look in the window of the mansion in either E-1 Front Door Key or E-2 Double Trouble (at least prior to King Boo appearing behind you in the doorway).  The chain is perfectly visible, hinting at it’s location.

But then when you look in a bit later… it’s gone. I guess King Boo was the one who hid that safe and chain?  After all, it’s only after he appears lurking behind Luigi in the doorway that the chain suddenly disappears without a trace.  Either way, it’s a nice little hint very few players have probably paid much attention to before now. 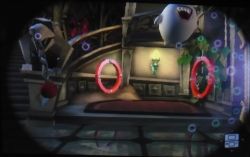 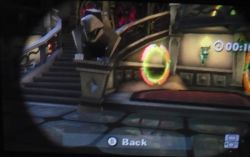 Indeed, maybe this is giving them a bit too much credit, but the whole setup of the scene makes me think they deliberately designed it to be hard to spot by having an action packed scene take place in the foreground (King Boo’s attack) to take everyone’s attention away from whatever could be happening in the background.  It’s pretty ingenius.

2. The In Game Clock that actually works

No, you didn’t hear that wrong.  There’s actually a clock in Gloomy Manor that tells the real time based on what’s set in the 3DS date and time settings.  Here’s a picture:

Yep.  That very same clock in the Parlor that you use the Strobulb on for a gem is a genuine clock that tells the time in the real world.  And yes, it was 10:42 when the picture was taken. 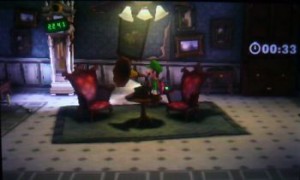 Above: The clock at the back actually shows the time as set on the 3DS system clock.

Now that’s such attention to detail right there.  I mean, clocks saying the actual time in game?  I don’t think I’ve actually seen that happen very often in a video game.  Unfortunately Next Level Games forgot to capitalise on this rather neat trick when the Old Clockworks came around as the third mansion, since absolutely none of the clocks there are set to the actual time by default.  Pity, it would have pretty cool if the digital clock in the Clockmakers Chambers/Room had gone off if you’d actually entered at 9:00.

1. The Dark Light Goggles appear in the adventure

Finally, if you’ve ever played the multiplayer mode in Luigi’s Mansion Dark Moon, you may have came across an item called the Dark Light Goggles.  These special glasses turn all Dark Light affected objects visible for the one wearing them, and let them see the invisible permanently.

But did you know these actually make an appearance in the main single player mode?  Yup, again in Gloomy Manor, head back to the Lab some time and look on the table next to the door.  Lots of different pairs of glasses, and I’m pretty darn sure one of them is literally the same Dark Light Goggles worn in the ScareScraper/Thrill Tower.  Have a comparison: 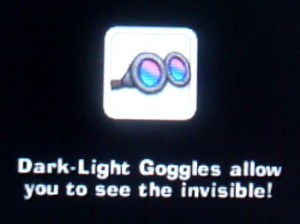 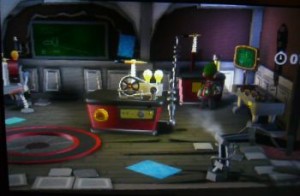 Above: Whenever you want these to appear, they won’t.  I spent four out of five Thrill Tower floors trying to get these to show up.

Yep, seems like the same set of glasses to me.  More proof they’re another one of Professor E Gadd’s inventions I guess.

Well, that concludes this list.  Did you notice any of this stuff in Luigi’s Mansion 2 when playing through the game or replaying the missions?  And are there any other interesting little details in this game you think many people didn’t notice until they replayed the stages multiple times?