Is the Mario series being influenced by Mario ROM Hacks? 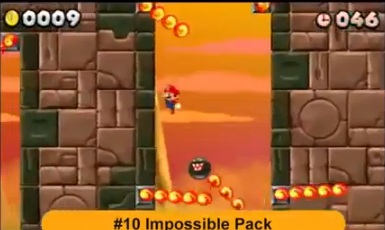 Especially the Kaizo type played in so many Youtube Let’s Play videos? Because I’ve seen more and more things once only expected in difficult ROM hacks get made standard by the latest Mario games that I wonder whether some of Nintendo’s newer Mario developers either watched the videos or were part of the ‘hacking’ scene in their youth.

Above: Even this Mario music video shows such levels in the background at certain points…

I mean, I can’t be the only person who’s noticed how much more often Munchers seem to be appearing in modern Mario games, right? After all, they were completely absent from every Mario game bar remakes between Wario Land 1 and New Super Mario Bros Wii. That’s FIFTEEN YEARS between appearances, yet they’ve become all common in the recent New Super Mario Bros games?

And isn’t it funny how the way they’re used in New Super Mario Bros U’s Challenge levels is almost identical to their usage in ROM hacks?

Above: This is basically an official kaizo level

Heck, they even used sideways and upside down Munchers this time, just like those ultra difficult games people play on Youtube!

Not just those either. Anyone remember how Missile Bills seem to have got a lot more powerful in recent games? Back in SMB 3, all they did was turn around once you passed them. Yet now in New Super Mario Bros Wii and the like they basically act the Homing Bullet Bills from the fan games and hacks rather than the Mario 3 enemy:

Above: I’m sorry, but heat seeking Bullets were never in the 2D games prior to this.

It really does seem like a lot of concepts and objects used in kaizo hacks and other fan projects seem to be brought back in recent Mario games for Nintendo themselves to use in much the same way.

Talking of difficult games and kaizo, it seems like the recent games have quite a lot of content that could be considered as such, mostly in the ‘secret’ levels and downloadable level packs. Sure it did technically exist in Mario games prior with the Lost Levels, but it seems like it’s become more and more commonplace as the series went on.

Like how Endless World of Yoshis/Crazy Maze Days could almost be seen as proto kaizo:

It has many characteristics found in fan made levels. Ultra high difficulty, lack of checkpoints, trial and error gameplay, fast scrolling, mazes, having to redo the whole level if you make a minor mistake like with the Chomp Rock thing and puzzles which aren’t that easy to figure out. It may or may not have predated the Kaizo and I Wanna Be the Guy, but it seems to have quite a few of the ideas them and their successors seem to have refined into a twisted art form.

Yoshi’s Island DS is another obvious case of being inspired by hacks and fan projects, the secret levels are so blatantly unfair and even poorly designed they’re impossible to distinguish from the fan made ones!

In case you didn’t watch the videos, the whole design of the secret levels in Yoshi’s Island DS seems to be built around trying to annoy the player as much as possible with traps you can’t see or detect in advance, the possibility of being forced to die at every opportunity and gimmicks which are not fun in the slightest. The game reminds me of some Yoshi’s Island based games and mods, and not in a good way.

Or how the Perfect Run in Super Mario Galaxy 2 and World S8 Crown from Super Mario 3D Land are basically official platform hell/kaizo challenges, complete with the ‘one slip up and start from the beginning’ bit:

And many of the challenge levels in New Super Mario Bros U seem to basically be ‘canonizing’ stuff from Mario ROM hacks and fan games. Like the whole ‘jump on enemies in a row without touching the ground to win’ thing. 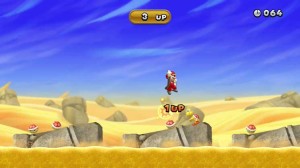 Above: 1-Up enemy hopping challenges.  New to official Mario games, not new to unofficial ones.

That’s been done in a lot of ROM hacks before Nintendo officially made it part of the Mario series with New Super Mario Bros U.

How about the whole challenge with the mole on the raft? Where you have to get the mole to the end of the level to win? That’s very much a concept you’d expect to see in a kaizo hack, not an official/published game.

It’s also sort of interesting how Nintendo has basically included the whole ‘ascetic’ concept, where you have to avoid killing any enemies or getting any coins. It’s not called that, but there are some definite similarities between fan made levels like this one:

And New Super Mario Bros U challenges like these:

Above: This challenge is literally ‘don’t touch any coins or enemies’.  Wonder where we’ve heard that before…

But do you know what the best evidence I’d say of them being influenced by these game mods is? New Super Mario Bros 2’s Impossible Pack:

Come on, even the very NAME shouts Kaizo! And that level design with difficult enemies in tight spots, zero coins and power ups in the entire level and tricky gimmicks like rising purple acid with narrow jumps past saws and wall jumping up shafts while dodging Fire Chomps and Firebars are all things I’d expect out of the next Kaizo Mario World, not an official level pack!

Everything about it just makes me think of someone like ProtonJon playing a difficult Mario hack with save states and get annoyed at the unfair difficulty. Heck, you could even say Nintendo are harsher than the fans, at least the fans let you use save states and rewinds to beat their levels!

In general, I’d say Mario games seem to be taking more and more inspiration from the fan works based on them, with the super hard bonus levels that were not as common in the NES and SNES days, the elements like Munchers and appearing/disappearing blocks which were far rarer back in Super Mario Bros 3 or World and many ideas seemingly taken from ROM hacks of the Mario series like not killing any enemies or collecting any coins.