Is Luigi’s Mansion 2’s ScareScraper Proof Classic Zelda Could Work on 3DS or Wii U?

And by classic Zelda, I mean the NES Zelda style.  Where you explore maze like dungeons and fight hordes of enemies in a way that’s focused more on exploration than combat that the puzzle solving found in more recent Zelda titles.

Above: Traditional Zelda dungeons were far more like dangerous mazes than the puzzles they are today.

Which is pretty much what the ScareScraper actually is in Luigi’s Mansion 2.  You’ve got giant maze like floors filled with random enemies you have to defeat in large numbers, keys needed to open locked doors and a boss after every couple you have to defeat by repeating attacking it rather than any kind of puzzle based strategy.  Heck, you’ve even got upgrades you unlock by collecting enough money to buy them, sort of like the rings and sword upgrades in the original Zelda.  It’s strange to think about, but the ScareScraper pretty much is the closest thing to a 3D version of Zelda 1 that’s ever been mad.

Above: More so on Expert than Normal, but even in the above you can see some basic similarities in structure.

So with this mode working so well in Luigi’s Mansion 2, is it possible that a Zelda title in the same style could be just what’s needed to revitalise the series?  No boats, no trains, no masks… just good old hack and slash style combat in maze like worlds where the enemies come in large numbers and the amount of NPC fetch quests and puzzles is kept to a minimum?  I think it could.

Additionally, a lot of the modes and ideas from the ScareScraper could be quite easily adapted to a Zelda game if you think about it.  The Dark Light Goggles could be retooled into the Lens of Truth or another similar item, the map is obvious and the power upgrades could changed into things like the white sword and magic sword from the first Zelda title.  It just seems so logical.

Keep in the online component to make it a bit like an upgraded Four Swords, and you’ve got a neat little idea for a Zelda game that could be a nice test to see whether more ‘traditional’ Zelda titles still sell in today’s market.  After all, if 6 or so million people bought Zelda NES back then, imagine how much larger the audience could be in 2013 or 2014 with how much more mainstream gaming has become.  It could even become a New Legend of Zelda like sub series or something… 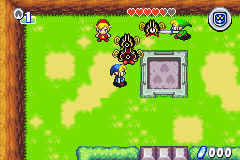 Above: A Zelda game based on the ScareScraper could be like a 3D version of Four Swords.

So do you think the ScareScraper is proof a traditional Zelda style game could work in 3D even with all the focus being kept on fighting enemies and exploring maze like areas rather than puzzles or gimmicks?  And could the basic ScareScraper gameplay be adapted to the style of a Zelda game extremely easily?