On March 24th 2016, the first ever Kunkel Awards for video game journalism had just finished. Split into five categories (news reporting, feature writing, news video, feature video and photography) and backed by the SPJ, they were meant to reward the best of the best in the world of gaming journalism.

But while the first awards setup was okay, it was heavily flawed. The awards were barely advertised, so no one really knew they were a thing. The categories were limited. Basically, it was a good start, but it didn’t quite hit the mark.

So let’s talk about these issues in a bit more depth, shall we?

First up, a quick question:

Did you know the Kunkel Awards were actually a thing?

Then you’re not involved in GamerGate or the SPJ, since pretty much no one else covered it. The large media sites like Kotaku, IGN or Gamespot? 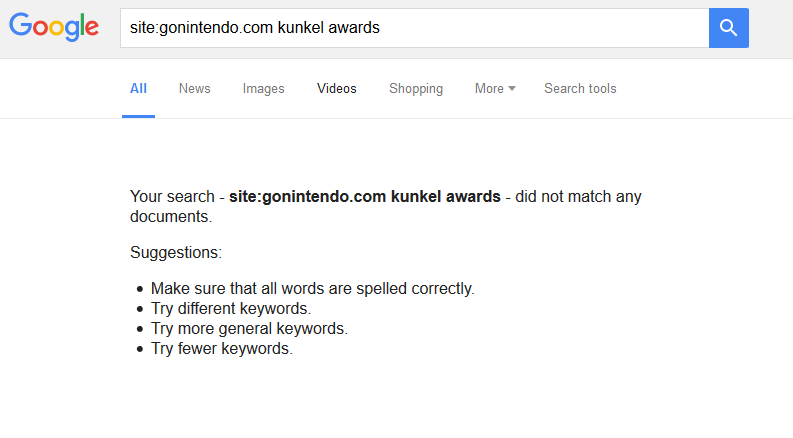 And the gamers? Hah, you must be joking, right? I didn’t hear one word about these awards outside of the odd GamerGate topic. As a result, there was probably more hype for the ‘character of the year’ poll at GameFAQS than the Kunkels.

http://www.gamefaqs.com/features/cb6
Above: Especially when Link and Cloud lose to the L Block from Tetris…

So the first thing the SPJ needs to do here is to get the word out of more. Get the large sites and forums actually talking about the awards and who should be nominated for them. Heck, go even further and provide a badge the sites can use in the sidebar. Or a button underneath articles that nominates them for an award.

Make it so people actually know this thing exists. Don’t make the Nintendo of Europe mistake by assuming that if you build it, they’ll magically come.

Another issue was that the categories were a bit limited. So in addition to the four categories we did get, we should have also gotten awards for:

1. The best investigative journalism. Reward the people who risk being sued or arrested (or worse) to blow the lid off the gaming world’s controversies.

2. The best ‘contrarian’ articles. In other words, an award for interesting articles that challenge people’s preconceptions about games, the media and the industry. Like Sean Malstrom’s articles about how 3D Mario games may have been a mistake, or that Tevis Thompson’s thoughts about the decline of the Zelda franchise. 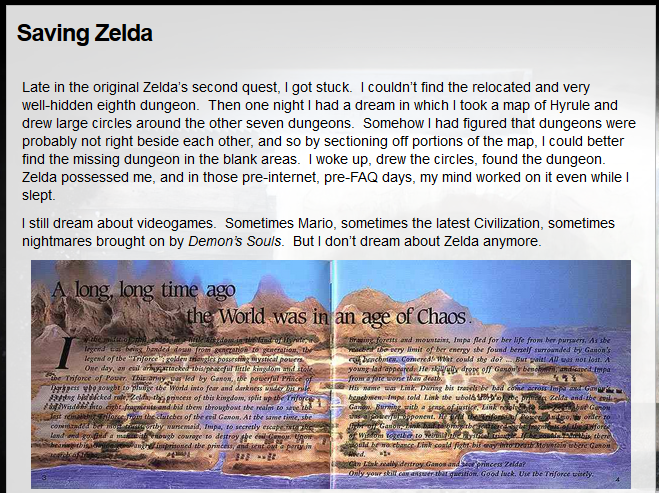 Above: It’s a flawed article, but it’s still an interesting perspective on the Zelda franchise.

3. An award for fact checking and verification. It’s depressingly rare in the current day gaming media, so it’d be nice to reward the few sites and writers that actually go and research rumours and claims before posting about them. Like Source Gaming.

4. Excellent in podcast/radio presenting. Audio only media deserves as much support as written articles and Youtube videos, right?

5. Best story and theory feature. Because the award nominees for the best feature article categories are all based on the industry itself and events outside of the games. So it’d be nice to see a category for interesting pieces about video game canon, timelines, theories and characters rather than industry events or problems. 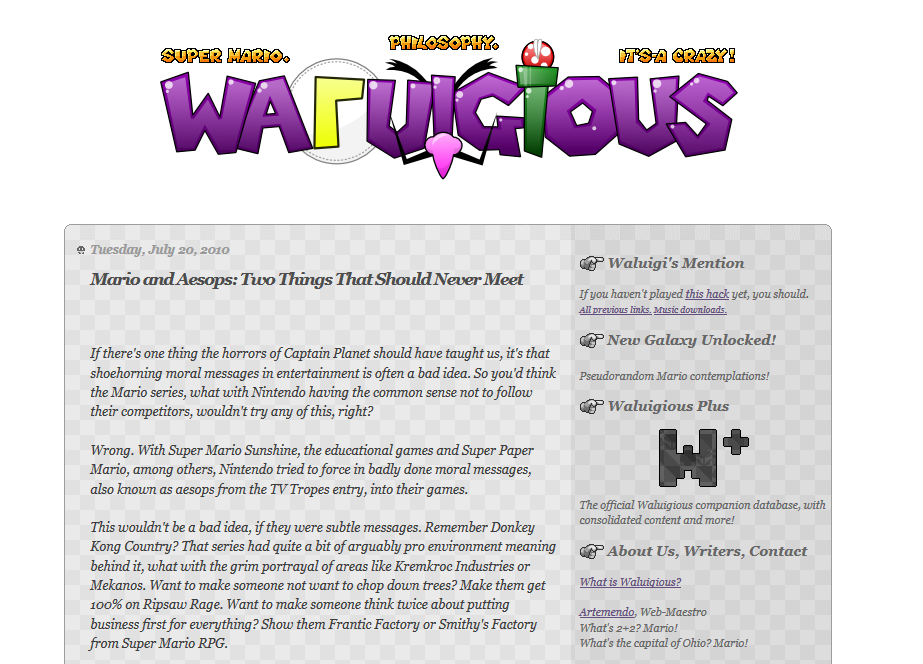 Above: Waluigious, Coin Heaven, DK Vine… all places with some interesting takes on popular franchises and their canon.

6. Author awards in general too. Like, an award for ‘best journalist’, which goes to an individual whose general quality of work is outstanding rather than someone who gets lucky with a single good article or video. Maybe lifetime awards for people who’ve contributed a lot to making the gaming media better.

8. The negative stuff. Yeah, this is not going to be popular with some people, but negative awards are as important as the positive ones nowadays. Film has the Golden Raspberry Awards (Razzies), art has the Turnip Prize, heck, X-Play used to give bad games the ‘Golden Mullet Award’. So why not a gaming journalism version? You could give out awards for bad journalism in general.

Heck, there’s even an award called a ‘Foot in Mouth Award’, which is apparently handed out by the Plain English Campaign for “a baffling comment by a public figure”. Wouldn’t that sort of thing be perfect for video game journalists, Youtube celebrities and analysts? I bet they’d be no shortage of competition!

Either way, a few more award categories (and a lot more promotion), and the Kunkel Awards could really become something big. Something that authors and sites are willing to fight to the bitter end for, and which inspires the gaming media to become much better than it currently is.

But what do you think? Would the above suggestions make the Kunkel Awards a lot better in future? Or are there other issues the SPJ needs to overcome first?