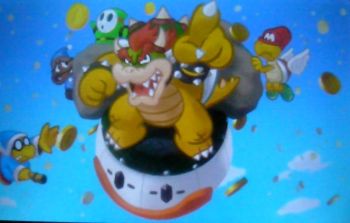 Yes, it’s finally happened.  ‘I’ve finally defeated the final boss in the hard mode of this game and saw the changes made to the ending by me doing so.  Want to know what you get?  What changes?  What it was like?  Well read on, and don’t say I didn’t want you there’d be spoilers!

Apart from two ending pictures (one of which is shown below), here are the changes I noticed:

The Prize for Winning

As far as unlockables go, you don’t get anything for beating Hard Mode, at least per se.  Instead, you get a few new ending screens showing the cast looking all happy, including the ultimate cast group shot.  Here the’s group shot (spoilers obviously): 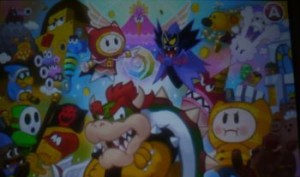 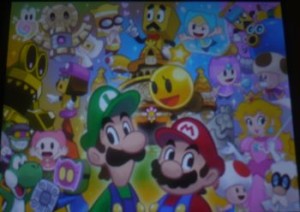 As you can see, it contains literally 99% of the game’s cast in one big picture!  You can see:

Yeah, pretty cool image isn’t it?  There’s also another one with Bowser and his troops surrounded by falling money and celebrating.  Here it is: 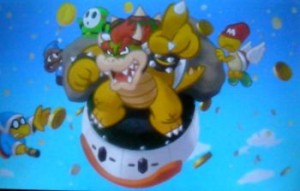 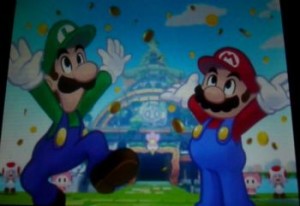 Again, it looks fantastic.  Got to love the character’s expressions and everything here!

How was it in general?

It wasn’t too bad to be honest.  Yeah the enemies did a lot more damage, but it never really got to the point you were likely to die constantly outside of a couple of the end boss battles, the giant boss battles and the intro.

Talking of giant battles, those were a bit of a different story.  Way, way too damn hard in this mode.   I mean, the last one literally could kill you in three hits.  Considering that the airship attack there was equivalent to at least two, that meant his later attacks could seriously kill you before you could move.

I have a quick question. Is it possible to save those to pictures to your sd card much like it was possible in new leaf or super mario 3d land?

Unfortunately, no it isn’t (as far as I know). Wish it was though.

if you go to game notes, then export, you can put them into your SD Card. I tried it and it worked

I don’t think this game is getting any DLC to be honest. Could be neat if it did though.

After beating normal mode…Do you get to just roam around and do whatever after the final boss? If not do you get to after hard mode?

Nope. It’s like Superstar Saga and Bowser’s Inside Story (and Paper Mario 1 I think) in that you simply get put before the final boss when you continue.

I know. That whole ‘no epilogue’ thing in these RPGs is getting kind of old to be honest.