From the very start, Fur Fun has been a… controversial game. Originally known as Kewpie-Jazzy and accused of ripping off Yooka-Laylee with its Kickstarter campaign, the title’s gained a bit of a reputation for being a less inspired 3D platformer. Like a poor man’s version of Banjo-Kazooie.

And while things have looked up since it’s early access release, it seems controversy is still afoot here. Why? Because as the title suggests, the Fur Fun team has been accused of stealing resources and responding to criticism in all the worst ways possible.

For example, look at this picture showing the game’s sound files. Taken by a member of The Cutting Room Floor wiki, it quite clearly shows things like the Banjo-Kazooie Mad Monster Mansion theme in the game’s resources folder. Or what appears to be one of Kazooie’s voice clips from the same game. 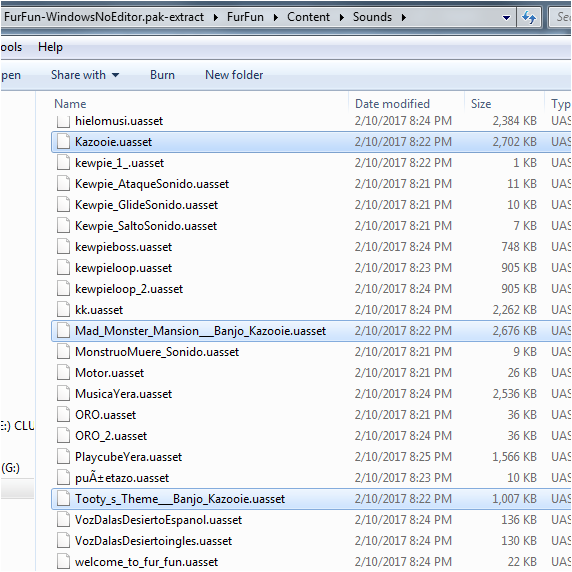 Now admittedly, this doesn’t mean said files are used in the game itself. It could be the case, sure. But a lot of games also have random and somewhat inappropriate content held on the disc/in the files that never sees the light of day. Like say, Mario Kart Arcade GP having photos of the Besian school hostage crisis. Or a certain Datel mini game collection having a Metroid Fusion ROM and emulator on the disc.

So Fur Fun may be in the clear here.

But their potential use of stolen resources is only one of the issues with the game. Another (and more worrying) one is their complete and utter inability to take feedback. For example, lots of reviews were going missing on Steam:

And as OtherEhm (the guy who find the stolen resources) found out, the developers also seemed to like sending copyright takedown notices for critical videos on YouTube too:

That’s a worrying indication that the development team is very thin skinned here. That the people behind this game have no ability to handle negative opinions of their work in a responsible manner and wish to simply take down criticism rather than deal with it.

And hey, note the past tense above. Since that time, a previously hit account was restored:

https://t.co/W2Mrby4pGL Copyright strike is now gone from my video and everyone is now free to have whatever opinion they want to have pic.twitter.com/JwVDOKv4Ri

Along with at least one negative review of the game.

So the development team is improving here. They are realising that accepting negative feedback is part and parcel of any decent game development team’s life. They’re trying to listen to critics now.