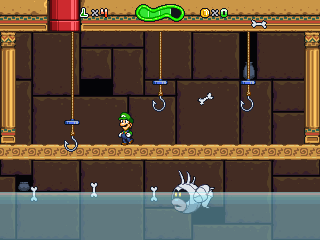 Remixes of Nintendo music are cool enough, but do you know what’s even cooler than remixing Nintendo’s original songs?  Making an all new soundtrack that’s as good as any from an official Nintendo game!  Here are five great fan made Nintendo soundtracks, where fans have made their own music based on their favourite video game series.

Way before Nintendo even considered making a New Super Mario Bros title for 3DS, BowieZ made his own fan made songs based off the series for a hypothetical sequel.  And believe it or not, they’re pretty darn catchy.  Have a listen:

The new Koopaling castle theme. It’s not the best castle song I’ve ever heard, but I do definitely wish Nintendo had thought of using it in the real New Super Mario Bros 2, it’s got to be more interesting than just another remix of the New Super Mario Bros Wii castle tune.

That’s not all though.  In addition to a bunch of New Super Mario Bros 2 songs, he also made what he thought a Super Mario Galaxy 2 soundtrack would sound like, as well as some fan made songs from non existant Mario Kart Wii tracks.  This one, called Dry Bowser’s Waltz is pretty catchy:

And this Super Mario Galaxy remix meant for a New Super Mario Bros game is quite good too, albeit made a bit worse by those annoying ‘bah’ sounds:

Isn’t it a bit of a pity that Nintendo didn’t try and use some of his new music for New Super Mario Bros 2 rather than just recycling the the Wii game’s soundtrack and adding sheep like bah sounds?  But what’s done is done.

An ambitious soundtrack for an ambitious project, the Ura Zelda Restoration hack is replacing the entire Ocarina of Time soundtrack with a fan made one by their composer.  More impressively, the soundtrack actually sounds extremely good for one which barely uses any remixes whatsoever.  Have a listen:

And for a full length dungeon piece, the Ice Temple’s actual level song is extremely catchy as well:

It’s incredible how many great songs they composed for a project like this, especially as they plan to go further and replace the entire default soundtrack in future.  If you want to listen to the other songs, go here:

The Bowser Strikes Back Soundtrack

Another great soundtrack from a fan made project that never got finished, the Bowser Strikes Back soundtrack is about twenty or so original level themes made for a spiritual sequel to Yoshi’s Island.  Almost all of them are great songs, but I’d say the best few are definitely the castle themes.  Flower Tower is a favourite, it sounds almost like something you’d expect to hear in a real game:

Some other great ones include the Sky Temple theme, which sounds even more stunning when used with the soundfont from Pokemon Black and White:

And the ice music soundtrack, an almost depressing tune that makes you want to contemplate the more important things in life:

It’s a fantastic soundtrack with nearly every song being memorable, to the point that I hope Nintendo takes some inspiration from it when making the next Yoshi’s Island game’s soundtrack.  Maybe this mysterious Yoshi Land U game could use some of these songs as background music?  Perhaps even with a real orchestra playing them and genuine latin chanting?

That would be absolutely amazing.

Not the real one from Dark Moon, a fan made soundtrack which has some catchy final mansion and boss themes.  Here are the songs:

As you can hear, they’re actually really nice fan made themes that wouldn’t sound particularly out of place in a Luigi’s Mansion title.  Indeed, I don’t think I’d be disappointed if Nintendo actually did put these songs in Luigi’s Mansion Dark Moon and used them for the finale, they certainly fit the mood of a climatic battle with King Boo.

Another fantastic soundtrack from a Nintendo fan game, the music in Mushroom Patrol the Midas Machine is absolutely amazing.  Yes, despite about 90% of the themes being custom composed rather than remixes of any actual Mario music, it stands up there with the actual music from the series in quality.  Here are some of my favourites:

That’s only a small sample of the amazing music the fan game has in store, and you should definitely download and play the demo to listen to the rest of said themes.  Just be aware that many of the better pieces of music are heard in the unfinished world 3/the ghost themed world.

Those are some amazing Nintendo game style songs fans have made for their imaginary Mario sequels and Nintendo fan games.  Goes to show you that some fan work is almost as good as the official stuff, isn’t it?

What do you think of all this fan made music?