Eight Strange Differences in the Japanese Versions of Nintendo Games 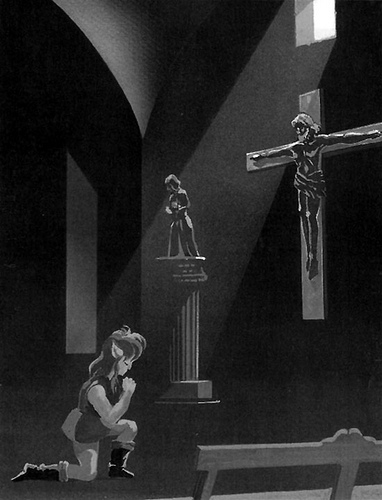 And more interestingly than that, the game was actually significantly different from the foreign version.  Namely…

It has no animation on the world maps

It’s not hugely different in the same way as some of the others, but it’s an interesting little difference regardless.  Especially given how Japan got the game THREE YEARS later than the US and Europe, with its first release there being in 2000 rather than 1997.

7. Ashley’s Song actually had a subliminal message in it (and arrogant lyrics)
Next up on the list, a few facts about a song I’m sure most Nintendo fans know by now. That being, Ashley’s theme tune in the WarioWare series.  You know, this one:


But while rumours still flow that the song has some satanic message hidden in it that ‘grants kids to hell’, the Japanese version has a few interesting differences of its own.  Here are the lyrics to that one…

ENOR EBMU N — it is a laughter spell
SIO IRA WN — what could be that spell?
I ED AM — I don’t remember this one
Oh no! I’m getting bored!

She’s everyone’s favorite person in the world
She’s all about
Ashley!
Ashley’s magic is the greatest
Nothing is strong to me!

The sea of the night sky has plenty of stars
I am all alone.
I want to make friends with everyone.
What should I do?

She’s everyone’s favorite person in the world
She’s all about
Ashley!
Ashley’s magic is the greatest
It’s a party tonight!

Not quite as ‘dark’ as the English one, is it?

However, dear God the Japanese version is just egotistical to the extreme.  I mean, every other line is something along the lines of ‘she’s better than everyone else and is super awesome’.  And while it does fit together in a somewhat twisted way (given the arrogance displayed, you can kind of figure out why she has no friends/is all alone), it’s more the kind of song you’d expect Fawful to sing than someone in the WarioWare series.  Heck, you could probably tweak the lyrics only very slightly and actually have it work perfectly as Fawful’s theme song (given his complete narcissism in the Mario & Luigi series).

The song also has a genuine subliminal message hidden in it.  Namely:

It translates as ‘Made in Wario is number one’, or ‘WarioWare is the best’.  Not quite the satanic implications people accused the English song of having, is it?

And that explains that then.  The song’s much more innocent in Japan.

Have you ever wondered why the Redeads in Twilight Princess don’t act like the ones in other games?  Why they try to kill Link with giant cleevers rather than biting Link’s head off? 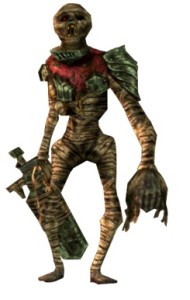 Above: Looks a lot more like a Gibdo than a Redead.

Well, that’s due to the localisation!  Apparently, they’re actually Gibdos (the mummy type enemy from the other games), explaining both their mummified appearance and slight change in behaviour.  The translators just screwed up and called them Redead Knights for some reason.

Or at least, the nearest you can get to it with a bloody map picture. Take a look at the Japanese (top) and Western (bottom) versions of the Mario Land artwork.  Notice anything odd? 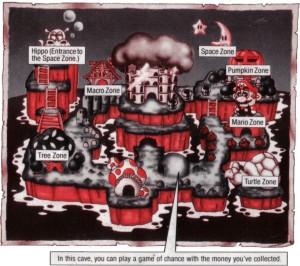 Above: Left is Japanese map, right is American map.  The moon isn’t pleased.

How about the rather distinctive choice of ‘not using any colour’ in the English manual, to make the world look more dark and menacing?

Or the angry scowl the moon has in the English version of the map, which is likely meant to look more ‘cool’, like Kirby’s angry eyebrows on American game covers?

Looks like someone at the localisation team thought Mario Land (the place) looked too cheery for its own good.

Or at least the stats were anyway, with bosses having far less health in the Japanese version compared to the US one.  Have a quick comparison:

With the exception of just two bosses in the game (Mrs Thwomp as listed above and Baby Bowser in the translation article on TMK’s website), every single opponent literally has between a 1.5 and 2 times the health in the US version as they do in Japan.  It’s one of the reasons the boss fights in the game are seen as such a slog to get through.

And additionally, it’s also a case of the Japanese game being made EASIER rather than the other way round!  Because Mario & Luigi Partners in Time was actually released in the US before Japan, and the European version ended up sharing the same boss stats as the Japanese one. Guess the designers realised that making you take thousands of health off of bosses that could put up force fields and heal every few turns was just ridiculously unfair.

3. Christianity was once more prominent in the Zelda series

And not in a way the atheists of the internet are gonna like very much either, because Link was also a practicing, somewhat devout Christian.  Just look at the artwork…

Of course, this was in the Zelda 1/2/Link to the Past days.  Back then, Christianity was actually kind of common in the series, with the sanctuary area clearly being based on a church and having a priest (who’s been renamed that in A Link Between Worlds), cross shaped tombstones and the book of magic.

Which in Japan is actually called a ‘Bible’.  Which kind of explains the giant cross on the front, even if it doesn’t quite explain its uncanny ability to cause objects to burst into flames when the magic rod is fired at them (maybe it uses holy magic or something, destroying the more ‘satanic’ legions of Ganon).

Because of two things.  Namely what TV Tropes calls ‘Earth Drift’ and Japan’s complete lack of familiarity with Christianity.

The first is where a series tends to start off with more ties to the ‘real world’ and gradually drift away until it’s a ‘self contained universe’, for unknown reasons.  It’s fairly common in works of fiction (it also occurs in Mario and Pokemon, with the former having talk of Brooklyn and the latter having stuff like Mew being found in the jungles of South America) and was likely also true of Zelda, which at the time was closer to a traditional ‘medieval fantasy’ work than the unique… thing the franchise is today. 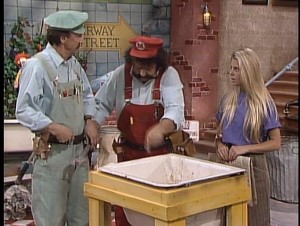 Above: Mario in the 80s.  A little different to Mario depictions today.

And as for why Christianity is seen as magic… well, it’s not exactly a common religion in Japan, so Japanese works tend to wildly misjudge everything about it and make all kinds of silly errors and exaggerations about the faith.  It’s also used a lot as an ‘exotic’ thing, kind of like everyone uses latin for ancient things no one knows about and ominous chanting or how eastern religions like Shinto and various pagan beliefs tend to be used for an exotic flavour in western works.

Either way, the older Zelda games (and the Japanese ones even more so) had a distinctive Christian flavour to them, which somewhat thankfully changed with the development of the franchise’s unique mythology and backstory.

2. Japan’s Version of Rogueport had a Murder Scene

It’s already been mentioned here in a Mario facts article, but it’s still worth noting as an example of how ‘different’ the Japanese versions of games can be anyway.  IN Rogueport (an area in Paper Mario the Thousand Year Door), you can enter a broken house with litter strewed about and all the signs of a confrontation.  But while it looks like a plain old horder’s home in the English speaking world…

Just take a good look at what it looks like in the Japanese version! 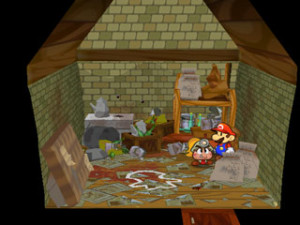 Yep, it’s actually a horrific murder scene, complete with a chalk outline of a Toad and fresh blood on the floor.  It also kind of makes that Bandit who robbed you seem a whole lot scarier when you think about it, since that’s actually the house you end up chasing him to.  Guess as well as a mere thief, the guy’s an actual killer too, and possibly even one who brutally murdered some innocent guy in his own home before stealing it as a criminal hideout.

Appropriate for an area which is supposedly a pastiche of games like Grand Theft Auto, maybe less so for an E rated Mario game.  So it was taken out in the localised versions of the game.

And finally, you’ve got the most obvious case of ‘bowderisation’ in a Nintendo game.  Remember Crazy Wario in Wario Land 2?  The one which wanders around in a confused daze with blurred vision?

Well, turns out he’s actually drunk in the Japanese version, complete with the balls the penguins throw being beer mugs in said game.  Have a comparison: 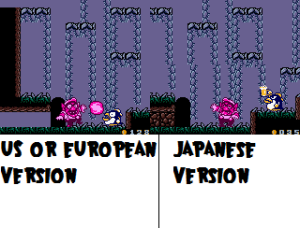 It’s not really surprising.  I mean, guy swaggers around like he’s about to collapse while burping bubbles of poison at his enemies after getting by some liquid?  What else could it be?

And that artwork certainly sells it… 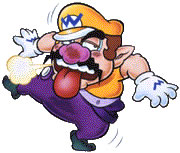 So yes, Crazy Wario was indeed drunk in the Japanese version.  Hooray for alcoholism in Nintendo titles!

Well, that ends another list.  Guess those Japanese versions of Nintendo games really can be pretty darn different after all!