Recently on the internet (aka that place where people seem to believe anything they read), a rumour was going around that Donkey Kong Country Tropical Freeze had been delayed to February 2014.  It was covered by quite a few other Nintendo sites (mostly ones like GoNintendo and Nintendo Everything), and quite a few people understandably freaked out and said Nintendo’s Wii U was doomed this holiday season. 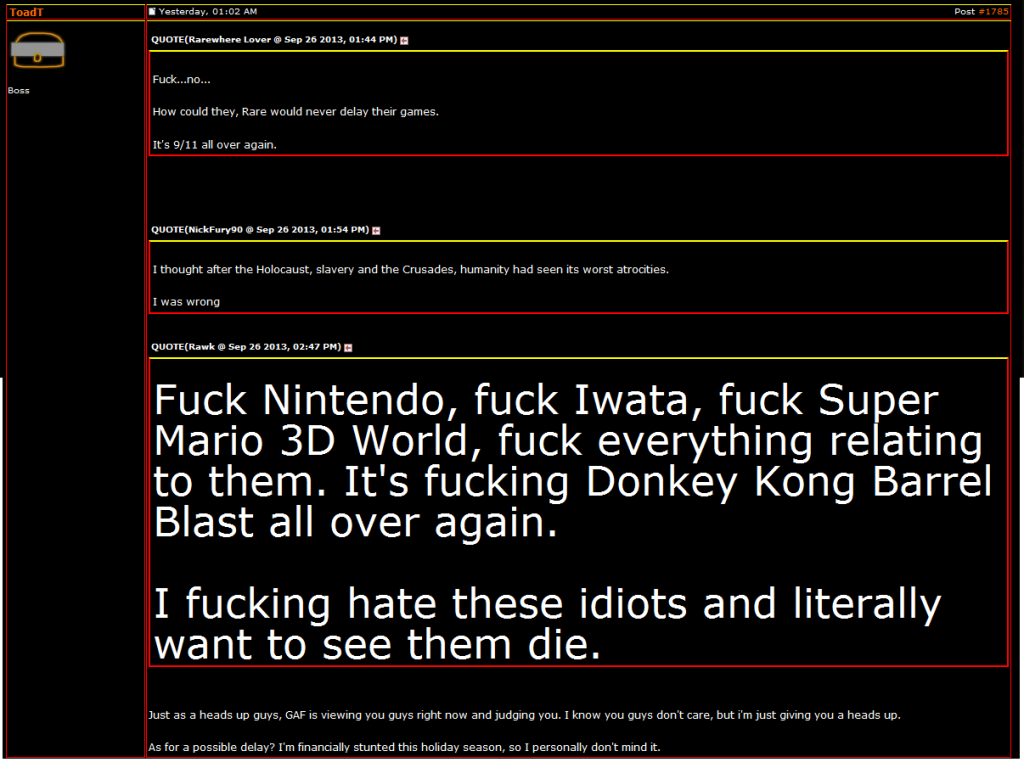 Above: DK Vine’s reaction was slightly less than positive about the ‘news’.

But don’t be worried!  In the last day or so, a certain few people have been finding evidence that this whole ‘delay’ thing was complete and utter crap with no basis in truth!  Yep, scaremongering by anti Nintendo gamers hits again, and here’s all the evidence for why the game most likely isn’t delayed:

To start off, Nintendo themselves still mention it as coming December 2013, with part of a Nintendo UK press release talking about DonkeyKong games being advertised at the end of the year up to Christmas.  Here’s the quote:

That is on top of TV ads for all its big franchises – including Mario, Donkey Kong and Zelda, which will run ‘continuously from half-term to Christmas’.

They wouldn’t even mention Donkey Kong if it wasn’t for Tropical Freeze, since Returns 3D has been mostly unadvertised for months (for good reason) and DK has no non Tropical Freeze games due any time soon.  Similarly, if they did delay Tropical Freeze, they would presumably keep the ads going til February, not end them at Christmas when the game’s two months away and due to be released in a dead zone.
There’s also the fact that on every Nintendo official site I can name, the game still explicitly gives the release date as December 2013.  Proof:
Nintendo of Europe/UK: 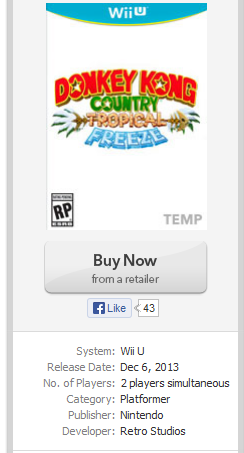 The only ‘hard to tell’ one is on Nintendo of Japan’s website, where Tropical Freeze has an ‘undecided’ release date and potential classification as a 2014 game.  However, since this is only on exactly one region’s website, there’s a distinct possibility the game could have merely been set for a later release date in this region.

This is supported by how many wikis and sites (like Mario Wiki, Wikipedia, etc) do not list the game as having a Japanese release date, as well as how some regions (like the US) tend to get Donkey Kong Country titles earlier than others (like Japan).

However, where the rumour really starts to fall apart is in the ‘original source’.  You see, on NeoGAF and some other sites, they list a site called Xtralife as one of the sources giving the changed release date as being Februrary 2014.

Look on the site for a minute.  Here’s a link:

As you can clearly see, it lists the game as being released on Diciembre 2013.  Which in case you can’t figure out the obvious, is Spanish for ‘December 2013’.  There’s no February release date on the site given as a source to begin with, making the rumour rather questionable as a result.  But hang on, didn’t they also mention Amazon?

Yes they did.  So let’s check out whether Amazon lists a 2014 release date.  Amazon.com?

Nope.  Doesn’t even seem to give a release date.   How about Amazon.co.uk?

Not there either.  So none of the sources given for this ‘changed’ release date mention anything about a 2014 release, a delay or anything of that nature.

The icing on the cake is that apparently, DK Vine actually contacted Nintendo about this (live in the middle of their radio show), and Nintendo themselves actually asked for a source for the idea that the game was delayed!  So we’ve got websites stating it’s coming 2013, all official Nintendo sites stating the same, Nintendo marketing advertising Donkey Kong Country for this winter and a whole lot more besides all proving the game has most definitely not been delayed in any shape or form.  Sounds like an open and shut case to me!

But hey, what do you think?  Are you now positively convinced the talks of Tropical Freeze being delayed are complete rubbish and the December 2013 one is correct?