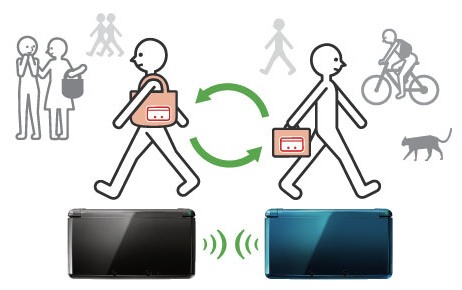 When it comes to digital distribution and video games, the general consensus seems to be that physical copies of games are on the way out.  But has Nintendo’s very own StreetPass system kind of hurt the digital game sales ‘model’?  Has their new hardware feature actually made it so digital distribution isn’t really too much more convenient than buying games in actual box form?  I think so, and here’s why…

Because StreetPass means you’re already forced to leave the house and go find other 3DS owners to 100% complete any of your games.

So why exactly wouldn’t you just go to a video game store?

Think about it for a minute.  You need to meet other video game fans to complete a video game that utilises StreetPass, right?  Well, where better to find other 3DS owners than a traditional video game shop?  A place where in theory, the store demo unit is absolutely perfect for getting easy StreetPass hits for minimal effort.

And a place which in theory is no less convenient to visit than anywhere else you might have to go to get StreetPass data.  You already need to head into populated areas like towns and cities if you want to complete the Shadow Link battles in A Link Between Worlds or finish those StreetPass Mii Plaza games, so why not also just pop into the local Gamestop or something on the way and get the games in a traditional format? 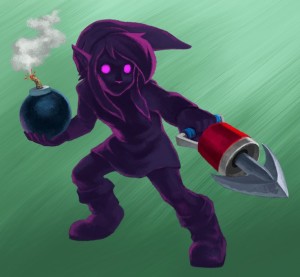 Above: If beating these Shadow Links and getting the 50 StreetPass medals involves a nice walk around town to begin with, why not just go and buy your games when outside the house too?

Because there really is no reason to do otherwise.  The convenience factor of being able to buy a retail game without leaving your house is utterly destroyed by the fact that without meeting other 3DS owners, you likely can’t completely finish it.  The price based incentives to buy digitally don’t exist, because Nintendo’s not sane enough to set their prices at Steam like levels rather than at the same price as the versions you buy in shops.  And with all the disadvantages of digital distribution that are made even worse by Nintendo’s lack of account system (no game resales, no sharing, no other such things).  Nintendo has given people no reason at all to bother buying games through the eShop instead of stores.

Perhaps that might even have been the plan in the first place.  Make digital game purchases for the 3DS a matter of ‘choice’ rather than convenience by requiring people to go far enough out of their way that stopping in a real world shop isn’t actually any less of a hassle than beating the game already would be.

I disagree, I find that Nintendo are actually doing themselves a favour by making more games digitally available. How is it in their favour? I find it quite annoying digging through all the Game Cartridges that use Streetpass, when in all reality that could well put you off the idea of getting more Streetpass by spending umpteen hours trying to look for the cartridges when all the games could be sitting on your system with a few clicks away from redeeming the data as it’s easier to get to, and you spend less time in looking for the games and… Read more »

Streetpass was made in favor of places like Japan where just taking your 3DS to work with you gets you a ton of hits, Japanese people don’t need to specifically go to shops to get hits. There’s also the fact that most people buy eShop cards to go digital, so they’re still going to the shop to buy them anyway.

Streetpass is particularly annoying for me because I am a compulsive completionist but Canada is really sparsely populated. I’m still not sure about digital distribution (and particularly skeptical of models that mean your games are gone if your console gets bricked) but personally I find it much more of a pain to buy a Nintendo or PSN card to redeem for digital games than to just buy a hard copy if it’s available.

Digital distribution allows people to download the games and store them on the memory card on the 3ds, thus allowing people to change games without swapping cartridges. That is the ONLY benefit to it, unless some special bonus is included with the software purchase. The major downside to the digital purchases is that you do not get any of the media/artwork that comes with a gamecard, but are charged the same exorbitant prices as purchasing a gamecard. Wake up nintendo. You would like to cut out the middle man and sell directly to the consumer without the added costs of… Read more »