Can We Bring Back Fansites please?

Yes really.  Forget the hordes of generic gaming news sites, the blogs written by people seemingly only in it for the advertising money and all this ‘social media’ lark that seems to be going on now.  What I really miss (and want to see back) is the traditional video game fan site, the type of website that was most popular in the 90s and early 00s.  And why do I want it?  Well, read the full article to find out!

1. Fan sites had more on them than news

As in, the kind of fun stuff which seems to have mostly vanished from the internet. Like Super Mario Bros HQ’s Chuck Quizmo quizzes and Dethrone the Mushroom King games or the random sections on Lemmy’s Land.

Above: Super Mario Bros HQ for instance had people’s memories of first playing Mario games.  Among a lot of other stuff.

Much more interesting than ‘yet more news about games written in a slightly different manner’, another ‘top ten list about some generic subject’ or ‘lets review the latest game that three million other people have just reviewed at the same time’.

2. The designs were at least varied (if not great)

Because in the olden days, people actually designed and coded their sites themselves rather than relying on some third party or making minor tweaks to some free/paid script from a theme shop or download site.

Were these designs always brilliant? Of course not (sites like Lemmy’s Land and the Odyssey of Hyrule haven’t exactly aged well layout wise), but they at least had a sort of ‘soul’ to them. They weren’t all generic blue and grey deals that look like a bad knock off of IGN and other ‘big sites’.

Above: Lemmy’s Land (which is still going) may have a very outdated layout, but at least it’s not just another bland blog template.

I miss that.  I miss the kind of ‘DIY’ mentality a lot of early internet website owners had in the 90s and early 00s.  The kind which seems like it’s been replaced by one of ‘outsource to professionals’ by a bunch of people who apparently an unlimited supply of money they’re willing to throw away on their get rich quick attempts.

3. Fan sites had personality of their own

The owners came up with their own ideas, fanon, in jokes, etc.  Like how DK Vine has constructed an entire universe around the Donkey Kong series and Rare’s other titles (to the point of even having their banner ads be parodies of real world ads starring characters designed by Rare). 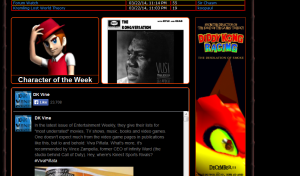 Above: DK Vine has plenty of personality.  Love the Hobbit parody poster.

Above: Kasuto.net had personality too.  Bit misguided sometimes (the stock market was apparently about soup according to one of the articles), but interesting regardless.

And other examples are numerous too.  Like how older Zelda sites came up with their own theories and timelines and whatever based on the Zelda games and their unexplained mysteries.  How sites like Lemmy’s Land were made as if they written by a character in the series (in this case, Lemmy Koopa and his fellow Koopalings).  How Boo Mansion had a whole Mario trading card game and system back when the forums were active.  Heck, the whole existence and site of Digibutter.nerr.biz was one of these before it went to hell.  Indeed, before owner ‘Francis’ decided it had to be like every other boring news site with a bunch of RSS feeds and random gaming chat, the place was a booming community based on the Super Paper Mario game complete with constant role playing, systems based on the world of Flipside and Flopside and the whole concept being a real life version of a forum actually mentioned in the game itself.

Above: Digibutter.nerr was a real world version of Francis’ website from Super Paper Mario.  As mentioned in this section of the game:

God, it even reminds me of those Mario blogs that used to exist, the ones with a ton of interesting articles about the Mario universe and how it worked.  I still remember spacepop4u’s Mario blog covering all manner of random things about the series, or the good old site Waluigious that was at one time an affiliate of Nintendo 3DS Daily and Community. 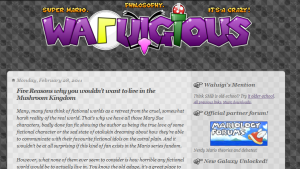 Above: Waluigious; a great site and a now dead relic of a bygone era.

I miss that stuff to be honest.

4. Gaming fan sites actually helped each other out

You know, with the whole affiliation deal and sidebar blog rolls and mentions of friend site activity on the home page.  There was a certain sort of subculture to the whole deal complete with its own standards, ethics and feeling of ‘we’re all in this together’.

Pity that seems to have died off to a huge degree in recent years.  I can’t even begin to count how many new sites seem to completely ignore the whole affiliation concept altogether and focus only on social media, as if they only now care about helping themselves at the expense of everyone else.  Or how even among those that do add affiliates, most seem only interested in it for SEO reasons and give no thought into actually promoting or helping out their allies.  You know, the thing that affiliation and these link exchanges were actually about to begin with. 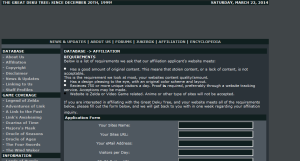 Above: Although affiliation guidelines bugged me.  Seems like they missed the point of the whole practice.

And it’s gotten even worse.  Now, some sites are outright removing their affiliations and deals and networks and stuff simply because of advice from third party ‘SEO’ companies with no involvement in the fan community, or simply because they (probably wrongly) believe they’re somehow an island and can do well without being associated with anyone.  Yes, I’m looking at you Pure Nintendo (after their magazine started, they literally dropped everyone they were affiliated with for ‘SEO’ reasons).

Talking of SEO, I may as well mention it right now.  That has to be worst invention in the history of the internet.  I’m sorry, but it’s true.  Google’s rules and the leagues of idiots trying to exploit or break them for quick cash has absolutely destroyed the quality of much of the internet.  Want a reason why spambots even exist?  Why a bunch of Engrish posts filled with meaningless garbage litter blog comments?  Why so many poor quality sites fill Google’s search results?  This stupid field and everyone in it.
That’s another reason I miss the days of fan sites.  Because not only did they actually bother to help each other out, but the SEO ‘specialists’ had mostly not realised the internet existed and were doing offline crap like telemarketing instead.

And no, not just the meaningless ‘social justice’ led ones like replacing Mario with Pauline in Donkey Kong or having a level to show someone’s love for their other half (via a poorly built Mario stage filled with coins and blatant level edits).  I mean real, interesting stuff like this:

Above: Super Mario Fusion Revival, Psycho Waluigi, Brutal Mario and Mushroom Patrol the Midas Machine. Not in that order.

Unfortunately, it seems this type of fan content has got rather screwed over by the decline in traditional fan sites and things?  And gets highlighted less and less nowadays. Why?  I don’t know.

Probably either because of a lot of modern gaming site owners are either ridiculously paranoid about supposed copyright issues or only think their audience cares about whatever silly comic Dorkly or whatever puts out this week.

Yeah, Banjo Kazooie actually had someone try and make a fan sequel to it in ROM hack form.  Did most people ever get to hear about this?

Of course not, the gaming news sites didn’t care.  They seemingly only care about what lame jokes they can make about the ‘doomed’ Wii U.

Hopefully I’ll be able to change a bit of that when my own personal fan game project is finished in a year or so (thanks to some decent contacts and persistence gaming site contacting), but I suspect not.  Instead, the four millionth crappy comic about some one note joke will get featured alongside some Mario shaped birthday cake and a poorly researched article about why Nintendo is evil because they’re not feminist.

So yes, that’s why I miss the good old fashioned video game fan site, and don’t particularly enjoy the constantly move towards generic gaming sites run by people with little interest in video games or their fans as a whole.

Does anyone else agree and kind of wish the more old fashioned type of Nintendo site would make a return?

i would like to formally confess my love to you

…How is replacing one player character with another via mod “social justice”? People wanna play as Pauline, let ’em, it’s not like she got any love from Nintendo or much of anything to do until Odyssey.