Out of Bounds in Shiveria; Some Interesting Findings From Beyond Mario Odyssey’s Glass Wall 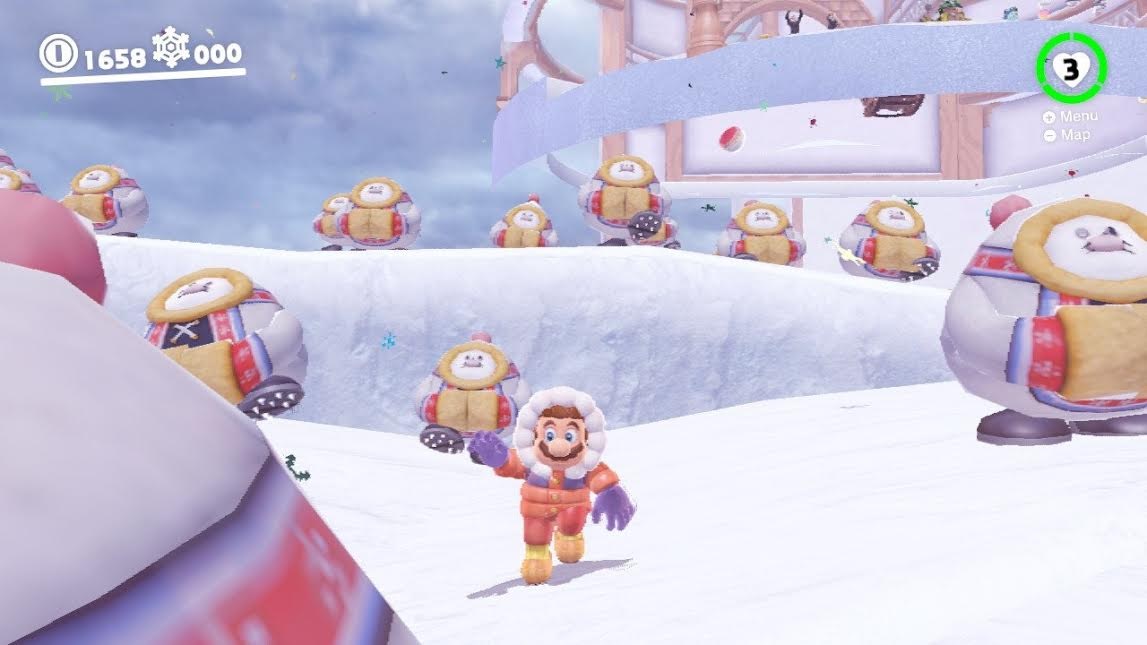 A couple of days ago, a very interesting bug was found in Super Mario Odyssey. Located in the Snow Kingdom, this glitch lets players break out of the main room next to the race track, and end up exploring the track itself on foot. Here’s a video showing it in action:

So what’s out there anyway? What’s beyond the wall in Shiveria?

Well. Quicksand for some reason. Yep, all that snow on the side of the racetrack actually acts like quicksand when Mario stands on it. Why? Not sure really. I guess Nintendo thought it’d be a quick way to slow players down if they went off track?

Maybe, though it still doesn’t make much sense when you think about it. The Shiverian you Capture in this kingdom doesn’t sink into the quicksand, and they’re not controlled in many areas outside of the race track to begin with. Wouldn’t it make more sense to set up a new object that only slows them down in the race and doesn’t require special coding to avoid having the player die mid race?

Eh, who knows. Either way, the use of quicksand is hardly the only interesting quirk you can find out here. Oh no, another one which defies explanation is the whole death barrier set up for the area in general.

Because if you try and have Mario walk around the track, he dies in seemingly random spots for no apparent reason. Like with the quicksand, there’s no logic behind these; they don’t do anything in the actual race.

So why are they there? Why have a kill zone about 10 metres after the start line and another one about ten metres to the North West of it?

It just doesn’t make any sense. The player will never normally reach this area, and if they do there’s no harm in them exploring it. Again, a weird coding decision on Nintendo’s part, and one that doesn’t seem to help anything in-game.

Still, it does give a possible hint towards the game’s development. Why?
Because from what we can tell, it’s far more difficult to reach the Iceburn Cup circuit in the level the same way. In most cases, Mario just dies before hitting solid ground, despite clearly being above it.

This implies that the death barriers around the courses may not have been in the initial plans for the level, and that at one-point Mario may have well have been meant to explore part of them by foot. Remember, games tend not to have solid ground outside of their boundaries, especially for areas the player immediately gets booted out of in normal gameplay (like here in the races). Similarly, they also tend to block off areas the player isn’t supposed to reach with failsafes like instant kill zones.

The fact Nintendo did not do this here speaks volumes about the game’s plans.

As do some of the weird collision objects you can encounter in the crowds. For instance, you see that flagpole over there to the right?

Well for some odd reason, it actually adds like a wall and a short ledge you can stand on. Like, a ledge that goes up to about one fifth of the pole’s height.

And that makes us wonder… is this area’s design another late change? Because it almost seems like a winner’s podium or raised crowd box was meant to be over there, not a giant flagpole you seemingly can’t fly or do anything else.

So check out the videos of the glitch online, try it for yourself and show us what you find in this area. Because despite appearances, it’s clear there’s more to the Shiveria race tracks than meets the eye!