Boundary Break; A Youtube Series That Goes Beyond the Worlds of Your Favourite Video Games 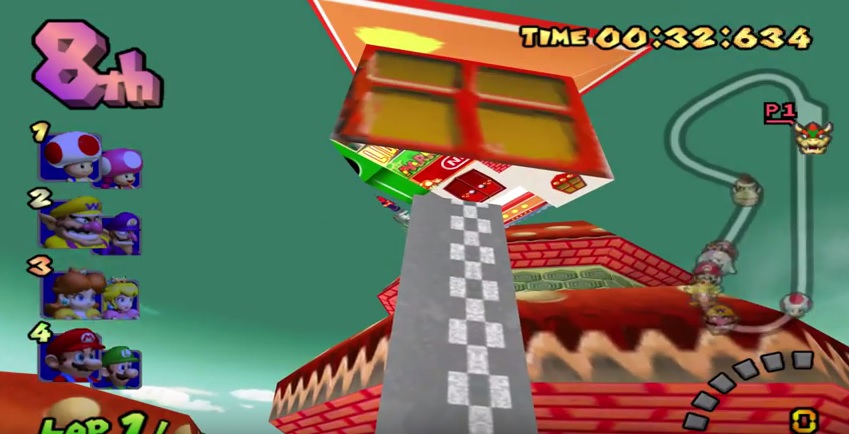 It’s not often on Gaming Reinvented that we feature interesting Youtube series in an article. Sure, fan games often get a news post, like the various Paper Mario fan games and SMW ROM hacks we’ve covered in the past. And Mario Maker stuff sometimes gets a bit of coverage too.

But Boundary Break is such an interesting series concept that we didn’t think it was right not to post an article about it.

So what it is? Well, exactly what you think. Youtube user Shesez uses various cheat codes and modding tools to switch camera angles, and go far outside the worlds of various Nintendo games. This allows him to do things like explore background locations in Mario Kart and F-Zero GX, get interesting closeups of distant characters in Mario cutscenes and find all kinds of interesting things that you wouldn’t have a chance in hell of knowing otherwise.

For example, did you know the Mario Kart Double Dash used glitched textures as part of the lamps in the background on Mushroom Bridge?

Above: Even Nintendo apparently takes shortcuts with their textures…

Or that Peach has some truly horrifying looking character models and textures in Super Mario Galaxy, especially if you zoom in at the wrong time…

Above: Peach without a face is a horrifying sight.

How about that in the final boss battle in The Legend of Zelda The Wind Waker, there are three parts of the Triforce floating at the points the water rains down from? That’s fascinating:

Above: Lots of cool stuff about Hyrule too…

And there are loads of others. Want to know whether Peach really is naked in that cutscene in Paper Mario the Thousand Year Door? Or whether Kroop has eyeballs underneath his gigantic eyebrows? Or where characters go when they jump out of windows? No problem:

It’s also interesting to catch out goofs by the designers. Like how in Super Mario Sunshine, Isle Delfino couldn’t possibly exist with its current layout. Why? Because apparently, Bianco Hills and Pianta Village both occupy the exact same space on the island. That wasn’t meant to be the case, but the in game models didn’t leave any other interpretation.

Either way, I would strongly advise you check out these videos, and maybe subscribe to Shesez’s channel too. It’s the kind of interesting gaming video that deserves to be far more popular than it is, and which is so more original than yet another generic Let’s Play or ‘theory’ video.